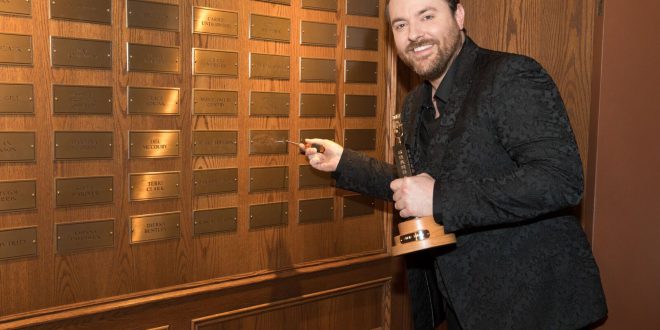 Chris Young places his name plate on the member gallery backstage after being inducted into the Grand Ole Opry family. Photo by Chris Hollo

Grammy-nominated vocalist Chris Young was officially welcomed and inducted into the Grand Ole Opry family this evening by his friend, Opry member Brad Paisley. Backstage before taking the stage, Young recounted how he had begun listening to the Opry at around age four and first saw the show live at around age eight. “There is always such a respect for where we all come from here,” he said.

After Young had performed two of his hits and two of his favorite country classics for a sold-out audience, Paisley took the stage to present Young with the Opry Member Award presented to each official member of the Opry family.

“Just look where you are!” Paisley exclaimed, noting the pair’s presence in the Opry’s famed circle center stage. “When I was first made a member of this crazy family, I had no idea the actual way this is a family,” Paisley said. “I quickly was accepted and asked to be a part of so many things. Chris is one of those people that will make the most of this. … This is a great human being, and that’s what the Opry needs.”

After the Opry member award presentation, Young held his award and said, “The two best words I can think of are ‘thank you.’” The hit-maker then concluded his set in the night’s first show along with Cassadee Pope on the pair’s number one single “Think Of You.”

Growing up in nearby Murfreesboro, Tennessee, Young dreamt of one day taking the stage at the Opry, and his dream came true when he made his debut on June 15, 2006. His dreams grew after that night, and tonight another dream came true as he stood on the stage being welcomed as an official member of the Grand Ole Opry. It’s a big week for Young, as he also releases his 7th album, Losing Sleep, this Friday, Oct 20.