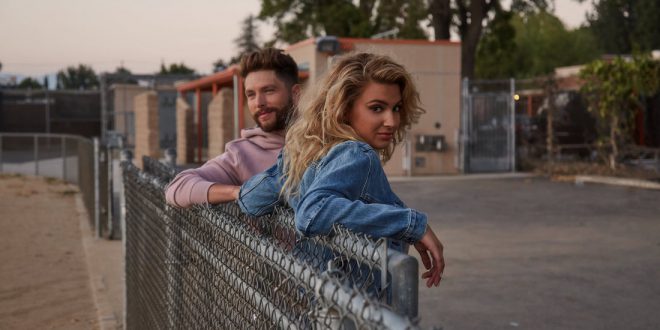 CHRIS LANE TAKES IT BACK HOME WITH TORI KELLY FOR NEW MUSIC VIDEO; WORLD PREMIERING TODAY VIA
VEVO LIVE: CMA AWARDS
“Take Back Home Girl” Soars Past 5 Million Streams While Climbing At Country Radio
Lane’s Headlining TAKE BACK HOME TOUR Continues With Wall-To-Wall Crowds
As he crisscrosses the country on his first ever headlining tour, CHRIS LANE gets down-home cool for the “Take Back Home Girl” music video featuring GRAMMY-nominated artist TORI KELLY making its world premiere today at 4:30 p.m. CT during Vevo Live: CMA Awards. During Vevo Live, fans can tune in to catch to the debut plus hear Lane talk first-hand about the making of the video. Immediately following the premiere, the video will be available across all of Vevo and starting Tuesday (11/7) will go into rotation on CMT.
Directed by Justin Clough and filmed in Los Angeles, CA, the video vividly captures the duet partners venturing down a “no-lane road” for a meet-the-parents hometown visit. Bringing the story to life, beautiful vignettes feature Lane and Kelly flipping through family photos before harmonizing under bright high school stadium lights. Leading up to the premiere, PEOPLE shared an exclusive behind-the-scenes photo gallery, while the pair opened up to Entertainment Tonight on set about teaming up on this song.
WATCH THE VEVO LIVE STREAM HERE: http://vevo.ly/VevoLiveCMA
Tallying more than 5 million streams in the month since its release, “Take Back Home Girl” is flying up the County radio charts after achieving most added (Country Aircheck/Mediabase) upon its debut. The follow up to Lane’s infectious GOLD-certified hits – #1 smash “Fix” and heartwarming Top 10 “For Her” – “Take Back Home Girl” is available for digital download here: https://iamchrislane.lnk.to/TBHG and is the first look at Lane’s highly anticipated sophomore album expected for release in 2018.
Two weeks into his TAKE BACK HOME TOUR, Lane has wowed high volume crowds with his unique R&B-meets-Country vibe. As he shines in the hard-earned spotlight for the 18-date headlining run with “Up Down” singer Morgan Wallen and newcomers Bailey Bryan and Dylan Schneider as openers, Morning Hangover exclaims, “…this is a show you need to have on your winter calendar!”
The excitement continues this week in Columbia, MO (11/9) and Iowa City, IA (11/11). Tickets and additional information are available at www.iamChrisLane.com
About Chris Lane:
Chris Lane continues to evolve in his on-fire career with “Take Back Home Girl,” featuring GRAMMY-nominated artist Tori Kelly. The follow up to his two GOLD-certified singles – #1 smash debut “Fix” and Top 10 tender tune of devotion “For Her” – is available now on all digital platforms. Lane’s Big Loud Records debut album, GIRL PROBLEMS, produced by superstar studio ace Joey Moi (Florida Georgia Line), gained the breakout star recognition for his jaw-dropping falsetto vocals mixed with a smooth R&B-meets-country vibe. Lane was named one of MusicRow Magazine’s 2017 Next Big Thing Artists and scored his first-ever nominations for the 2017 iHeartRadio Music Awards (Best New Country Artist) and the ACM Awards (New Male Vocalist of the Year). Lane’s profile is on the rise thanks to his national TV appearances on The Bachelor, Late Night With Seth Meyers and CONAN plus shout-outs from massive industry names like Bryan Cranston (Breaking Bad), Selena Gomez, Florida Georgia Line, Lucy Hale, Daughtry and more. The Kernersville, NC, native is crisscrossing the country on his headlining TAKE BACK HOME TOUR, catapulting him into the spotlight following his coveted opening slots on tours with Garth Brooks, Dustin Lynch, Rascal Flatts, Tim McGraw and Faith Hill’s long-awaited SOUL2SOUL TOUR and Florida Georgia Line’s THE SMOOTH TOUR 2017.
About Tori Kelly:
2016 Best New Artist GRAMMY-nominated singer-songwriter and producer Tori Kelly has been named as an “Artist to Watch” by Rolling Stone, USA Today and Spin. The California native sold-out her US tour in support of her debut album, Unbreakable Smile, which debuted at No. 2 on the Billboard 200 and includes the hits “Nobody Love” and “Should’ve Been Us.” Unbreakable Smile (Capitol Records) was re-issued on January 29 with two additional tracks: single, “Hollow,” which topped the Top 25 at Pop radio and climbed on the Rhythmic charts, and a brand new song entitled “Something Beautiful.”  Kelly starred as Meena, in the 2016 animated movie Sing alongside Matthew McConaughey, Reese Witherspoon, Seth MacFarlane, Scarlett Johansson. She is currently in the studio working on her second album.