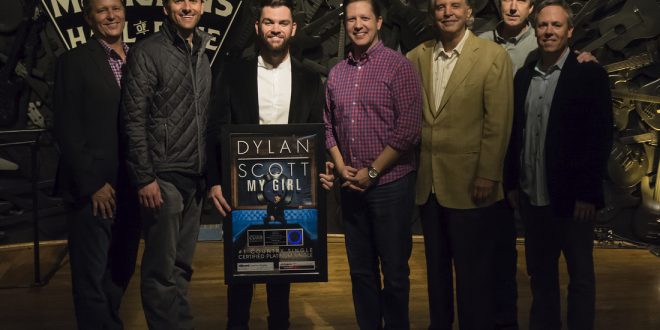 Riding an avalanche of breakthrough success, Curb Records’ DYLAN SCOTT celebrated his first career RIAA PLATINUM-certified single for his #1 debut smash “My Girl” reaching over 1 million combined sales and streams in the U.S. alone at an intimate soirée in Nashville yesterday (11/6). Guests, including his Curb Records’ team, family, friends and members of the music industry, gathered at the Musicians Hall of Fame & Museum to toast the singer-songwriter and present him with the official plaque. Hot on the heels of “My Girl,” Scott’s follow-up single – propulsive, white-hot anthem “Hooked” – is ascending the Country radio charts and has already surpassed 12 million Spotify streams.

Last month, Scott released his first holiday EP,MERRY CHRISTMAS, which includes brand new renditions of five traditional Christmas songs including “Winter Wonderland,” “Jingle Bell Rock,” “The Christmas Song,” “White Christmas” and “Santa Claus Is Coming to Town.” Wrapping up what he calls his “best year yet,” Scott and wife Blair will welcome their first child, a boy, in early December. He is currently touring with Justin Moore as the featured supporting artist on his HELL ON A HIGHWAY TOUR.

For more information on Dylan Scott and a complete list of tour dates, visithttp://www.dylanscottcountry.com/.