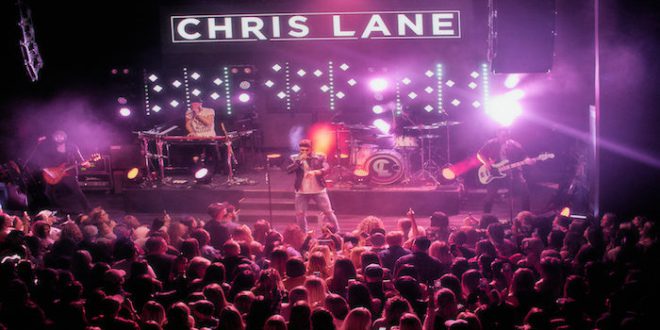 For the first time in his breakout career, smooth Big Loud Records crooner CHRIS LANE headlined a sold-out Nashville show last night (1/25) at Topgolf. Bringing his A game for a milestone stop on the TAKE BACK HOME TOUR, Lane’s unique vibe was on full blast for the electrified audience with 90 minutes of smash hits, new music and show-stopping covers.

The sea of concertgoers swooned as Lane showcased his current single “Take Back Home Girl” (featuring GRAMMY-nominated artist Tori Kelly). Captivated by the chart-rising duet, the crowd went wild for the hitmaker’s #1 debut “Fix” and Top 10 “For Her,” while getting down to new releases “One Girl” and “Old Flame.” More than 21,000 fans followed along as Lane took over @CMA Instagram stories, giving an inside look at the hours leading up to the bucket list show.

Following an acoustic set from opener Adam Craig, special guest MORGAN WALLEN brought his own brand of charisma and swagger to the stage. The Big Loud newcomer treated the packed house to his Top 30 debut single “The Way I Talk,” as well as new music and a breakneck medley of covers ranging from the Eagles’ “Life In The Fast Lane” to Bon Jovi’s “You Give Love A Bad Name.” Closing his 45-minute set with his undeniable new single “Up Down,” the vibrant talent solidified his one-to-watch status. Wallen will kick off his own headlining UP DOWN TOUR presented by Shiner Light Blonde February 2 in Indianapolis, IN before opening summer dates on Luke Bryan’s WHAT MAKES YOU COUNTRY TOUR.

As “Take Back Home Girl” closes in on Country radio’s Top 25 and soars past 21 million streams, Lane will continue to crisscross the country with upcoming headlining shows in Cabazon, CA, Milwaukee, WI and Billings, MT. He will head to Canada for a string of performances in March before taking the stage at high-profile festivals including Carolina Country Music Fest and Stagecoach this spring.

To learn more about Chris Lane and check his tour schedule, go to iamChrisLane.com

Previous Interview with Company of Thieves who are Playing Ryman Auditorium Sunday w/ Walk The Moon
Next Rising Artist and Nashvillian, Gavin Kennedy, Gives Fans a Peek of his new Album at hot Germantown Venue, The Back Corner