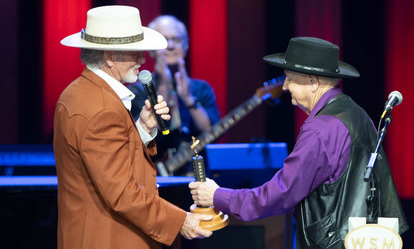 Charlie McCoy, a member of the Country Music Hall of Fame and one of country music’s all-time most lauded musicians, was welcomed as an official Grand Ole Opry member tonight by Opry member Larry Gatlin, just one of several Opry members on whose recordings McCoy has appeared.

“The musicians on this stage are some of the best to have ever made their way to Nashville,” Gatlin said. “You have their love and their utmost respect,” he continued as the Opry Band and singers surprised McCoy with a medley of some of the country classics on which he played in the studio, including favorites by Lynn Anderson, Bobby Bare, Waylon Jennings, George Jones, Barbara Mandrell, and Tanya Tucker.

Referencing “I Wanna Go Home” from Bare’s “Detroit City,” Gatlin said to his friend, “We are welcoming you into our home. I am humbled and honored to welcome into our family a friend of 50 years who I think is the greatest musician in the world and the Dean of the Nashville Cats, Charlie McCoy.”
Before concluding his set with his signature tune “Orange Blossom Special,” McCoy said “I’ve been so blessed in my career, and this is icing on the cake. … And by the way, I ain’t through playin’ yet!”

McCoy’s Opry invitation was delivered by Opry member Vince Gill last month on the same night Gill invited Hall of Fame songwriter Don Schlitz (“The Gambler, “Forever And Ever, Amen,” “When You Say Nothing At All”) to become an Opry member. Schlitz will be officially inducted later this year.

Music editor for Nashville.com. Jerry Holthouse is a content writer, songwriter and a graphic designer. He owns and runs Holthouse Creative, a full service creative agency. He is an avid outdoorsman and a lover of everything music. You can contact him at JerryHolthouse@Nashville.com
Previous Charley Crockett Set To Release “The Man From Waco”
Next PREMIERE: Bailey James’ Seductive Rocker “The Spell”