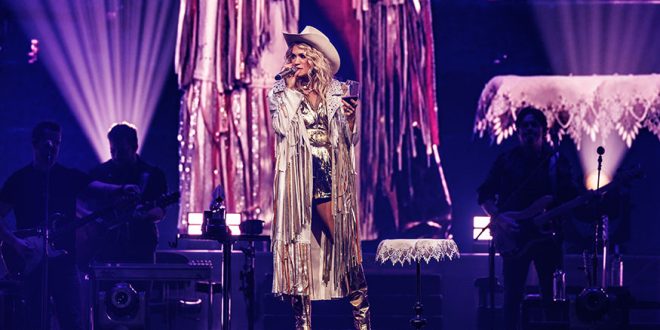 Carrie Underwood, kicked off her new arena tour, THE DENIM & RHINESTONES TOUR, Saturday night (October 15) with a sold-out show at the Bon Secours Wellness Arena in Greenville, SC.
With dates in Fall 2022 and Spring 2023, the tour will make stops in 43 U.S. cities including Nashville’s Bridgestone Arena (BUY TICKETS HERE.) Underwood is joined on  by special guest Jimmie Allen on all dates.

In addition to the hits spanning her 17-year career, Underwood’s nearly two-hour set featured songs from her new album, Denim & Rhinestones, which she co-produced with David Garcia, including lead single “Ghost Story” – where she traveled from the arena’s main stage on a florally adorned swing reminiscent of the one featured in the song’s cinematic music video – and “Hate My Heart,” (Listen above) which Underwood recently announced as her next single.

She also performed other fan favorites including “She Don’t Know” and “Crazy Angels,”the latter of which again brought Underwood high above the crowds, delivering gravity-defying vocals while performing aerial acrobatics within a suspended sphere-shaped apparatus. The packed arena went wild when Underwood brought Allen onstage to join her for a duet – and a bit of dancing – on the album’s title track, “Denim & Rhinestones.”

Her cover of Guns N’ Roses’ “Welcome to the Jungle” electrified the crowd, just months after she welcomed Axl Rose as a surprise guest during her headlining set at Stagecoach in May, followed by her surprise performance during the band’s UK shows at Tottenham Hotspur Stadium in London in July.

Music editor for Nashville.com. Jerry Holthouse is a content writer, songwriter and a graphic designer. He owns and runs Holthouse Creative, a full service creative agency. He is an avid outdoorsman and a lover of everything music. You can contact him at JerryHolthouse@Nashville.com
Previous Joe Galante, Jerry Lee Lewis & Keith Whitley Formally Inducted Into HOF
Next WATCH: Thomas Rhett & Katy Perry’s “Where We Started”