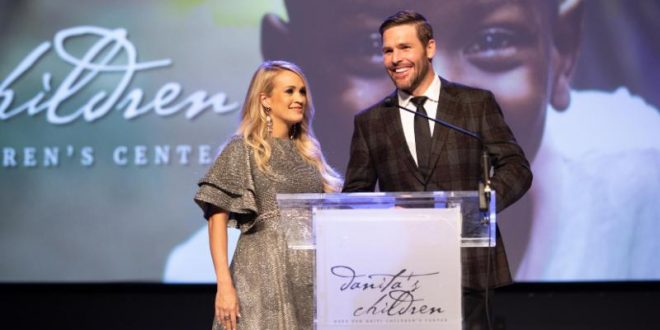 “I am so humbled and grateful that Mike and Carrie would use their platforms to bring awareness to the great need and suffering of the children of Haiti,” said Danita Estrella Watts, who founded the organization in 1999. “The funds raised this night will be used to transform the lives of, literally, thousands of children as we provide them with quality education, medical care, and loving homes.”

Tennessee Governor Bill Haslam provided the opening prayer for the evening, which was attended by over 450 patrons at the invitation-only event. Television host Elisabeth Hasselbeck returned this year to emcee the event, which was highlighted by an intimate concert by Underwood and superstar Brad Paisley. Performance painter Jared Emerson created an amazing work of art over the course of the evening. The painting and numerous other items, trips and experiences were sold through live and silent auctions.

“Thank you to all who came to  @danitaschildren gala last night,” said Mike Fisher via Twitter, who first visited the Danita’s Children center with Underwood in Haiti in 2014 and have been passionate supporters ever since. “We laughed and cried and celebrated a great ministry. Thanks  @bradpaisley @jaredemerson @ehasselbeck you guys are awesome!”

The mission of Danita’s Children is to rescue, love, and care for orphaned and impoverished children in Haiti, meeting their needs physically, emotionally, educationally, and spiritually so that they are empowered to become leaders in their communities and nation.

Music editor for Nashville.com. Jerry Holthouse is a content writer, songwriter and a graphic designer. He owns and runs Holthouse Creative, a full service creative agency. He is an avid outdoorsman and a lover of everything music. You can contact him at JerryHolthouse@Nashville.com
Previous Ed Sheeran Makes Surprise Bluebird Visit
Next Charlie Daniels to Release New Book November 6th