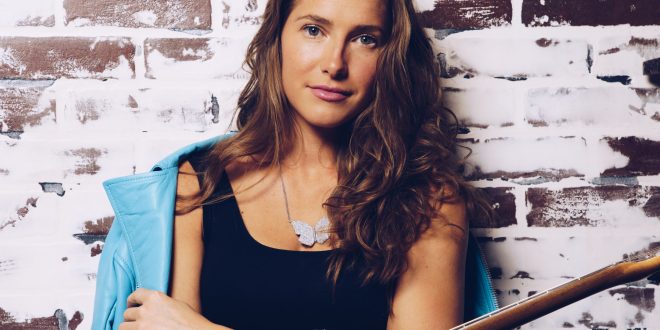 After showing the guys a thing or two at NAMM and returning from C2C: Country to Country music festivals in Dublin, London, and Glasgow, independent singer-songwriter and multi-instrumentalist Caroline Jones today released her wistful new single “Chasin’ Me”.

In “Chasin’ Me,” a persistent suitor slowly but surely makes it through the defenses of a woman who’s reluctant to be caught. But the time-tested rule applies – all things in good time – as Jones sings, “But now I’m the one who is losing my cool. Butterflies make me feel like a fool. I’ve always been the one in control, but that boy just does something to my soul. He’s chasin’ me… Down every road like my heart is a map he can read.”

This is the first single from Jones since her full-length album Bare Feet was released last March. Along with writing every song and performing all instruments (except for drums and bass), the country-pop artist co-produced Bare Feet with Grammy and Academy Award-winning producer Ric Wake (Mariah Carey, Celine Dion, Whitney Houston, Trisha Yearwood). The album climbed to #16 on the Nielsen SoundScan Country Albums Chart and #14 on iTunes Country Albums Chart.

On April 4th, Caroline will join country legend Kenny Chesney for his 21-date, cross-country Songs for the Saints tour. Chesney commented of Jones being added to the tour, “Caroline is so fresh, so filled with life and so consumed by her music, she seemed like the perfect person because of everything No Shoes Nation is about.” Following her dates with Chesney, Caroline will rejoin Zac Brown Band on The Owl Tour through the fall.

Music editor for Nashville.com. Jerry Holthouse is a content writer, songwriter and a graphic designer. He owns and runs Holthouse Creative, a full service creative agency. He is an avid outdoorsman and a lover of everything music. You can contact him at JerryHolthouse@Nashville.com
Previous Sam Bush Puts On His Rock Shoes For “Stop The Violence”
Next Alabama’s Randy Owen Honored By Boy Scouts of America