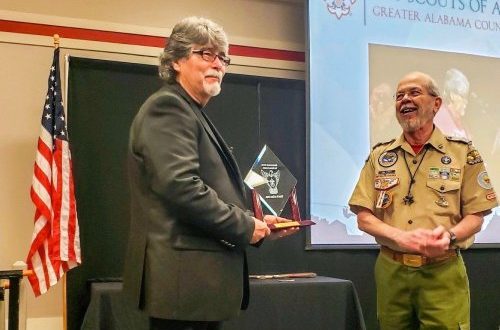 ALABAMA frontman Randy Owen was honored by the Boy Scouts of America this past Wednesday (March 20) at the organization’s American Values luncheon held in Anniston, Alabama.

Anniston’s local Boy Scouts chapter, the Choccolocco district, presented Owen with the Heart of an Eagle Award, a special recognition given to individuals who show compassion for their community through leadership, character and integrity.

“It’s a great honor to be recognized by the Boy Scouts of America,” says Owen. “I admire the great people who make scouting a wonderful lifetime experience for our state and country.”

Owen has been the lead vocalist of ALABAMA, the most successful and awarded band in country music history, for 50 years. When he’s not writing songs or performing on the road, Owen stays busy in Fort Payne, Alabama, operating his 3,000-acre ranch, Tennessee River Music, Inc., where he tends to 500 head of Hereford and Angus cattle.

Much of Owen’s time is spent helping others through his humanitarian efforts, such as launching St. Jude Country Cares for Kids, an annual radiothon fundraising event that has garnered more than $800 million for St. Jude Children’s Research Hospital. He received the Ellis Island Award for his charity work with St. Jude.

ALABAMA and Owen have played a key role in several disaster relief initiatives, including organizing and playing concerts to support rebuilding efforts from tornadoes that struck Tuscaloosa in 2011 and Jacksonville State University (his alma mater) in March of last year.

Music editor for Nashville.com. Jerry Holthouse is a content writer, songwriter and a graphic designer. He owns and runs Holthouse Creative, a full service creative agency. He is an avid outdoorsman and a lover of everything music. You can contact him at JerryHolthouse@Nashville.com
Previous Caroline Jones Drops “Chasin’ Me”
Next Brooks & Dunn Release “Ain’t Nothing ‘Bout You” With Brett Young