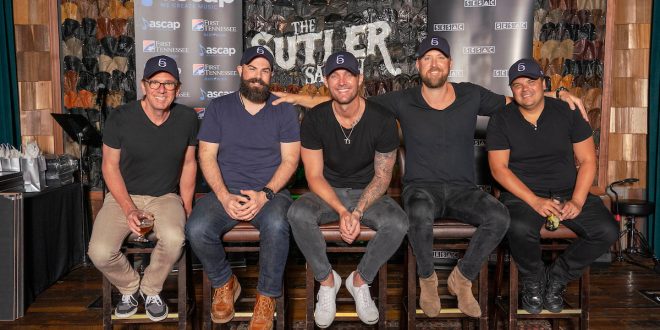 Yesterday (5/28), Brett Young, celebrated the success of his fifth consecutive No. One single “Here Tonight,” alongside co-writers Ben Caver, Justin Ebach and Charles Kelley. Hosted by ASCAP and SESAC at Nashville’s The Sutler packed with BMLG Records, teammates, family and friends, the lead single from Young’s Ticket To L.A. (BMLG Records) touts multi-week chart-topping status and has quickly surpassed 100 million streams in the US. “Here Tonight” serves as the first-ever No. One as a songwriter for Ben Caver (ASCAP), fourth for Justin Ebach (SESAC) and eighth for Charles Kelley (ASCAP). Additionally this week, Young is sharing the follow-up single, “Catch,” with country radio.

Young’s sophomore release, Ticket To L.A. (BMLG Records), debuted atop the Billboard Country Albums chart and follows his platinum self-titled debut, which dominated the Top 20 on the Country Albums chart for 37 weeks. Delivering five consecutive No. 1 hits with “In Case You Didn’t Know” (4X platinum), “Mercy”  (2X platinum), “Sleep Without You” (platinum), “Like I Loved You” (platinum) and “Here Tonight” (gold). Young was named ASCAP’s 2018 Country Songwriter-Artist of the Year.   You can catch Brett Young at multiple festivals throughout summer including Nissan Stadium at CMA Music Fest in Nashville on June 8, Country LakeShake in Chicago, IL on June 22 and Faster Horses in Brooklyn, MI on July 19. He will also open for Luke Bryan at Gillette Stadium on June 21.

Music editor for Nashville.com. Jerry Holthouse is a content writer, songwriter and a graphic designer. He owns and runs Holthouse Creative, a full service creative agency. He is an avid outdoorsman and a lover of everything music. You can contact him at JerryHolthouse@Nashville.com
Previous Featured Bonnaroo Artist: Steve Earle
Next Lewis Brice And Tin Roof Team Up For Lewispalooza 9