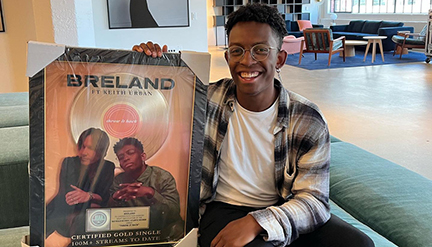 Breland Continues His Rise To The Top

Breland earns RIAA GOLD certification for his love-drunk collab with Keith Urban, “Throw It Back.” Accumulating much critical acclaim since its release, the music video amplified the buzzy song with Entertainment Tonight airing an exclusive behind-the-scenes look from the shoot here in Nashville.

Adding to his accolades, Breland has been selected as the Opry NextStage artist for July. The coveted program invests in the discovery of new artists and highlights one up-and-coming artist per month with featured original content, an Opry performance and support across the brand’s platforms. Check out Breland’s NextStage videos above. The two previous NextStage classes have featured artists such as Parker McCollum, Lainey Wilson, Riley Green and Tenille Townes. The class of 2022 includes Breland alongside Elvie Shane, Morgan Wade and more to be announced. Fans can catch BRELAND as he returns to the Grand Ole Opry stage on July 26.

Recognized as a Breakthrough Artist by Amazon Music earlier this year, Breland has launched Brecap, his new live radio show on Amp, the new live radio app from Amazon, where he discusses music, sports, culture, and more with friends. Tap in weekly here to listen to his take on everything.

To kick off July, Breland joined the USO, service members and local community at Fort Jackson’s Hilton Field in Columbia, SC, for an Independence Day celebration on July 2, performing a free concert to honor our nation’s history and express gratitude for all those who serve. Continuing on the road this summer, he’ll hit stages from coast to coast including the inaugural TidalWave Festival (8/12).

Music editor for Nashville.com. Jerry Holthouse is a content writer, songwriter and a graphic designer. He owns and runs Holthouse Creative, a full service creative agency. He is an avid outdoorsman and a lover of everything music. You can contact him at JerryHolthouse@Nashville.com
Previous Leah Marie Mason Signs With Warner Chappell
Next LISTEN: Blaine Holcomb’s “Lessons”