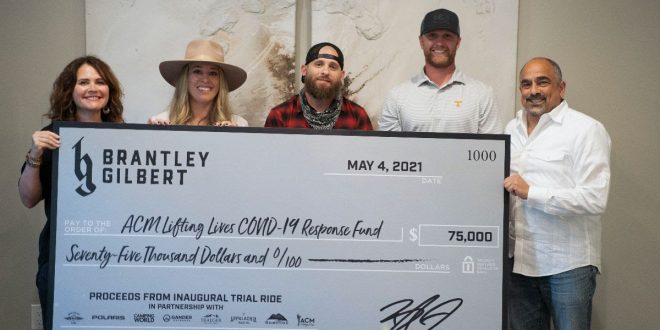 Known for sharing his platform with servicemen and servicewomen; veterans and veteran farmers; and his fans BG Nation, made up of blue-collar and hard-working individuals, country star Brantley Gilbert expanded his support to those in the entertainment industry who have lost work due to the COVID-19 pandemic, contributing $75,000 to ACM Lifting Lives, the philanthropic arm of The Academy of Country Music, going directly to their COVID-19 Response Fund.

“We had such a great time out on the trails in East Tennessee and it made it that much sweeter knowing we were there to help people who really need an extra hand right now,” shares Gilbert. “I’m honored to present this check to ACM Lifting Lives on behalf of BG Nation and I’m so grateful for our partners who made this such a fantastic event.”

“Brantley has been such a wonderful partner to our fund,” shares Lyndsay Cruz, Executive Director of ACM Lifting Lives. “He and his team came to us at an important moment to lend their help finding ways to raise money for our colleagues who are still in immediate financial need due to the pandemic. We are grateful to be the beneficiaries of his inaugural trail ride.”

A longtime partner of the “Hard Days” singer and songwriter, Polaris continues to support Gilbert’s event, donating a RZR Trail S 1000 Ultimate that will be available for auction later this summer, while Camping World will donate an off-road vehicle trailer, also available for auction later this summer. All monies raised via auction will directly benefit the ACM Lifting Lives COVID-19 Response Fund. Additional auction details will be announced at a later date.

Since the original launch of the ACM Lifting Lives COVID-19 Response Fund, $3.5 million was raised and distributed thanks to many sponsors and individuals. Funds were quickly dispersed to hundreds of people in the Country music community in need and who met the criteria. Visit www.ACMLiftingLives.org to contribute to the fund in support of ongoing relief efforts.

Fire & Brimstone explores love and family, redemption and life in a small town, with all 15 tracks written or co-written by Gilbert. Lead single “What Happens In A Small Town” featuring Lindsay Ell marked his fifth No. 1 as an artist, seventh No. 1 as a songwriter and earned nominations for the 2019 CMA Award for Musical Event of the Year and 2020 ACM Award for Music Event of the Year.

Music editor for Nashville.com. Jerry Holthouse is a content writer, songwriter and a graphic designer. He owns and runs Holthouse Creative, a full service creative agency. He is an avid outdoorsman and a lover of everything music. You can contact him at JerryHolthouse@Nashville.com
Previous WATCH: The Lone Bellow Enlist Their High School Coach For Video
Next WATCH: John Hiatt With The Jerry Douglas, “I’m In Asheville”