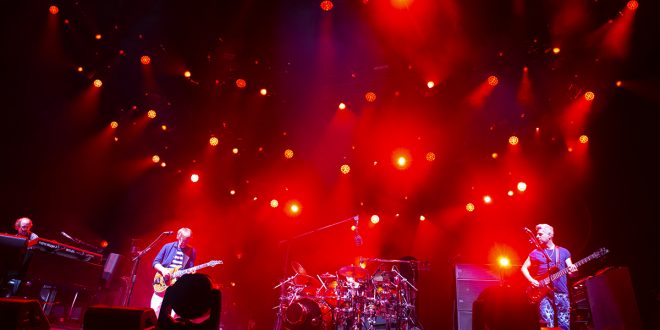 This was Nashville.com’s 11th straight year attending Bonnaroo and the best year yet! The only tough thing to deal with at Bonnaroo is the oppressive heat that June often brings to middle Tennessee. That was not an issue this year. The weather could not have been more perfect. Cool nights and warm days made this year’s sold out festival a dream. We’re pretty sure there’s not another festival in the world where you could find Ricky Skaggs and Post Malone on the same bill. The farm truly has something for everyone.

Thursday The Grand Ole Opry was back at Bonnaroo, with a great line up including Steve Earle, Ricky Skaggs, Old Crow Medicine Show and Nashville.com favorite Molly Tuttle. Caroline Rose, The Comet Is Coming, All Them Witches and The Nude Party made for an strong first day.

Childish Gambino probably should have been on the main stage on Friday judging from the size of the massive gathering in front of the Which stage with girls screaming much like a Beatles crowd. The hip-hop artist’s show has come far from the first time we saw him at Bonnaroo and was a feast for the eyes. We also caught a little piece of the Griz show which was very entertaining. But he led the Super Jam later on and that was more our taste with fine tribute to Dr. John.” Phish played the first of two shows with an always mesmerizing light show.

On Saturday Maren Morris, who recently posed for Playboy, played all of her hits on the main stage in an energetic show closing with her Zedd collaboration “The Middle.”
Bonnaroo veteran Kacey Musgraves was right at home on the Which stage playing several songs from her Grammy-winning album Golden Hour. The legendary John Prine was at That stage playing many of his hits like “Angel From Montgomery,” “Spanish Pipedream,” “Hello in There” and at 72 years young still puts on a hell of a show dancing off of the stage then returning for one encore.

Brandi Carlile started off our Sunday and was hands down the best show we saw. Her band was extremely tight and her string section made every song bigger. The sound quality was amazing. You could hear every note from every instrument. And surprise guest, country legend, TanyaTucker was a treat. We saw Cardi B’s dancers rehearsing early in the morning for her elaborate and fun set which we came back to see.

We are always sad for the shows we missed but you cannot be everywhere at once. And it’s not surprising that people come from all over the country for this wide spread selection of music. But the one thing that may be even stronger is the loving, friendly, accepting crowd. I have yet to go to another festival with this vibe. We keep in touch with many camping neighbors from past Bonnaroos and exchanged info with our neighbors this year as well. Stay tuned to Nashville.com for news on 2020 Bonnaroo!

Until next year Bonnaroo! You out did yourself. Special thanks to Elizabeth Thorpe and her amazing photography.

Music editor for Nashville.com. Jerry Holthouse is a content writer, songwriter and a graphic designer. He owns and runs Holthouse Creative, a full service creative agency. He is an avid outdoorsman and a lover of everything music. You can contact him at JerryHolthouse@Nashville.com
Previous Garth Brooks’ New Duet With Blake Shelton Released
Next Exclusive Nashville.com Premiere: Summer on Repeat 3 – Ali Morgan