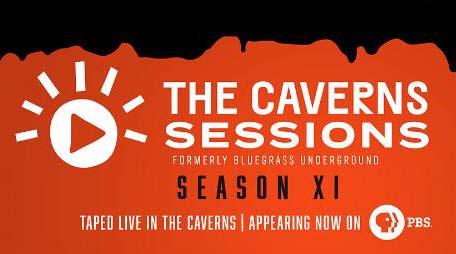 “As we begin our second decade on PBS, we look forward to The Caverns Sessions continuing to shine a light in the darkness on the full spectrum of music,” says Todd Mayo, The Caverns owner and co-founder of Todd Squared, LLC which produced the Emmy award-winning Bluegrass Underground for 10 years.

Beginning on Sept 10, 2022, television viewers nationwide can tune-in to The Caverns Sessions when the new season begins airing on PBS stations. Check local listings for specific airdates and times. Each episode will be available for streaming on PBS.org for 30 days after its original airdate. Visit The Caverns Sessions homepage on PBS.org.

The Caverns Sessions is produced by Todd Mayo and Todd Jarrell of Todd Squared LLC, and directed by James Burton Yockey with Andy Kern as Audio Engineer and Allen Branton as Lighting Director. The Caverns Sessions receives underwriting support from the Tennessee Department of Tourism Development, Gibson Gives Foundation, and Grundy County, TN. The 12 episode series is presented to PBS nationally in partnership with WCTE Central TN PBS based in Cookeville, TN, which exclusively aired the first episode of The Caverns Sessions and will present future episodes one week before they’re available nationwide.

“The Caverns Sessions brand now more closely relates to the soul of the underground series,” says Todd Jarrell. “Here is the perfect marriage of two things for which America can be most proud: amazing natural beauty and a deeply profound musical heritage. Through this variety of music, these artists represent the heart of the American experience.”

Looking to the future, The Caverns is investing in permanent lighting and sound, which make the cave capable of capturing episodes one at a time in addition to the typical multiple episode taping weekends

Though the original name is retired from the television series, Bluegrass Underground will live on as a yearly traditional bluegrass festival held every year at The Caverns. “14 years ago Bluegrass Underground began with The SteelDrivers playing underground in a cave and with a live broadcast on the legendary WSM radio,” says Todd Mayo. “We will continue to honor that name with a tried-and-true bluegrass festival every year.”

Music editor for Nashville.com. Jerry Holthouse is a content writer, songwriter and a graphic designer. He owns and runs Holthouse Creative, a full service creative agency. He is an avid outdoorsman and a lover of everything music. You can contact him at JerryHolthouse@Nashville.com
Previous Arum Rae Releases Wesley Schultz-Produced “Country Road”
Next Charley Crockett Announces Fall Tour