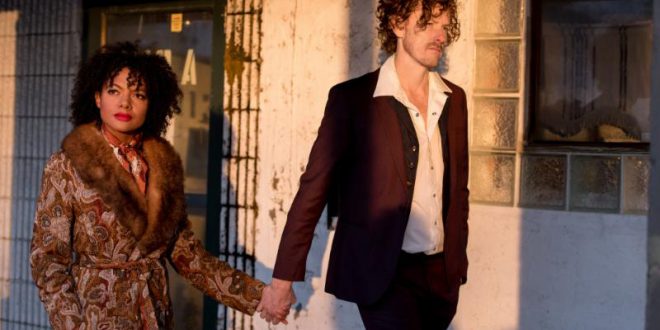 Today, Birds of Chicago release their new full-length album Love in Wartime on Signature Sounds Recordings. The album features “Superlover“, “Never Go Back” and “Roll Away“.
Allison Russell and JT Nero recorded the album in Chicago against a backdrop of bewilderment, deep-divide and dread, and Love in Wartime is a rock and roll suite with a cinematic sweep.Co-produced by Nero andLuther Dickinson (North Mississippi Allstars), it evokes epic efforts of the 60’s and 70’s, with love as the undeniable through-line. As Russell puts it, “Any act of love is an act of bravery. These songs are snapshots of covenants, big and small, of trust and understanding. We want to give people some good news, and we want them to be able to dance when they hear it.”
When the band released their last album, theJoe Henry produced Real Midnight, in 2016, critics scrambled to find the right terminology to describe the deep lyricism, gut-punch singing and fevered musicality… “Secular gospel” was one phrase that caught some traction. That fervor is evident in Love in Wartime as well: “Roll Away the heavy stone/roll away the heavy hours/roll on in the summer moon/who’s alive who’s alive who’s alive? ” The invitation is joyous, but urgent … call it “secular gospel,” or call it what they used to call poetry intoned over roots music mash-ups: rock n roll. The Birds of Chicago consider themselves a rock and roll band first and foremost, and Love in Wartime doesn’t leave any doubt about that.

Built around the chemistry and fire between Russell and Nero, the band has included a core band of empathetic assassins since it took to the road full time in 2013. Russell and Nero played with different bands in the mid-aughts (Po’ Girl and JT and the Clouds) before finding their way to each other. Nero found himself a transcendent vocal muse in Russell (a powerful writer in her own right) and the band honed its chops on the road, playing 200 shows a year between 2013-17. All that shaping and sharpening, over so many miles, led them back to Chicago’s Electrical Audio in January of 2017, to begin recording.The first day in studio was inauguration day, and they didn’t need any more motivation than that to do what they came to do.

Music editor for Nashville.com. Jerry Holthouse is a content writer, songwriter and a graphic designer. He owns and runs Holthouse Creative, a full service creative agency. He is an avid outdoorsman and a lover of everything music. You can contact him at JerryHolthouse@Nashville.com
Previous Max T. Barnes Honored As “International Artist of the Year”
Next Danielle Bradbery Partners With Nashville-Based ABLE