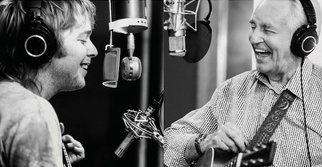 Billy Strings joined forces with bluegrass legend Del McCoury for a new version of Bill Monroe favorite, “Midnight on the Stormy Deep,” out today. Watch above.
The collaboration adds to a landmark year for Strings, who was recently named Breakthrough Artist of the Pandemic at the 2021 Pollstar Awards after continuing to perform consistently throughout the past year, both in-person and virtually.

Strings will continue to tour extensively throughout the fall and many shows are already sold out. Strings career is exploding having won Best Bluegrass Album at the 63rd GRAMMY Awards for his 2019 record, Home. Released on Rounder Records, Home was produced by Glenn Brown.

Music editor for Nashville.com. Jerry Holthouse is a content writer, songwriter and a graphic designer. He owns and runs Holthouse Creative, a full service creative agency. He is an avid outdoorsman and a lover of everything music. You can contact him at JerryHolthouse@Nashville.com
Previous LISTEN: Toby Keith’s “Old School” Out Today
Next Dierks Bentley Scores His 20th Career #1