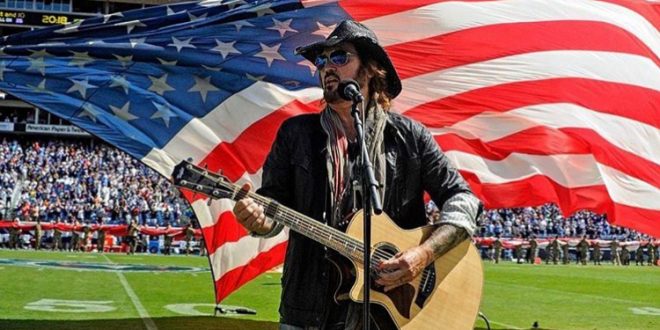 Always a champion for veterans and service members, Billy Ray Cyrus will return to his roots when he performs his self-penned anthemic “Some Gave All” with Voices of Service during the Titans Nov. 10 game against the Kansas City Chiefs.

Cyrus and Voices of Service, the singing quartet made up of active-duty Army military members and veterans who rose to national fame after advancing to the finale of NBC competition show, “America’s Got Talent,” are joining together ahead of Veterans Day for the Titans’ “Salute to Service.”

Cyrus performed “Some Gave All” with Voices of Service at the America’s Got Talent finale in September.

“Some Gave All” is the title of Cyrus’ first album which debuted on the all-genre Billboard album chart at No. 1 and stayed there for a record-breaking 17 weeks in 1992.

Voices of Service, comprised of members Ron Henry, Christal Rheams, Jason Hanna and Caleb Green, was formed through the Center for American Military Music Opportunities (CAMMO), which works to provides military members with opportunities to further their careers in the music industry. The group finished in fifth place on AGT and inspired millions around the country by raising awareness for post-traumatic stress disorder and other issues facing active military members and veterans.

Cyrus is nominated for the CMA’s Musical Event of the Year with Lil Nas X at the Country Music Association Awards Nov. 13 and four awards at the Nov. 24 American Music Awards.

Music editor for Nashville.com. Jerry Holthouse is a content writer, songwriter and a graphic designer. He owns and runs Holthouse Creative, a full service creative agency. He is an avid outdoorsman and a lover of everything music. You can contact him at JerryHolthouse@Nashville.com
Previous Interpretive Sign Unveiled In The Plight To Save Music Row
Next WATCH: Easton Corbin Releases New Video “Raising Humans”