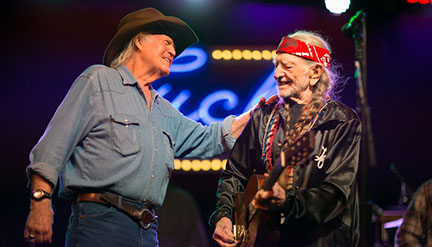 The Texas singer-songwriter who died on October 28th, 2020 was an integral member of the Outlaw Country movement. A favorite among music legends, Johnny Cash once called Shaver “my favorite songwriter,” while Willie Nelson declared, “Billy Joe is definitely the best writer in Texas.” Upon the announcement of Live Forever: A Tribute To Billy Joe Shaver, Nelson said, “He was just real; there wasn’t one phony drop of blood in him.” AllMusic called Shaver’s songs “among the greatest in the whole history of the (country) genre” while the Washington Post said, “When the country outlaws were collecting their holy writings, Billy Joe Shaver was carving out Exodus.”

From his album liner notes, co-producer Freddy Fletcher wrote of Shaver, “His influence on the greatest of artists is what inspired this project. The album is a testament to his words and their deep impact on wonderful songwriters and performers. He’s a hero to so many, and we are honored to pay homage to his legacy.”

On the topic of songwriting, Billy Joe Shaver once said “when you write songs, and you write good songs, people will always remember you. Words will always outlive us. And if your name is attached to those words, you’re gonna live forever.”

Music editor for Nashville.com. Jerry Holthouse is a content writer, songwriter and a graphic designer. He owns and runs Holthouse Creative, a full service creative agency. He is an avid outdoorsman and a lover of everything music. You can contact him at JerryHolthouse@Nashville.com
Previous Miko Marks Gets Big Opry Surprise From Rissi Palmer
Next Pilgrimage Announces Performance Schedule