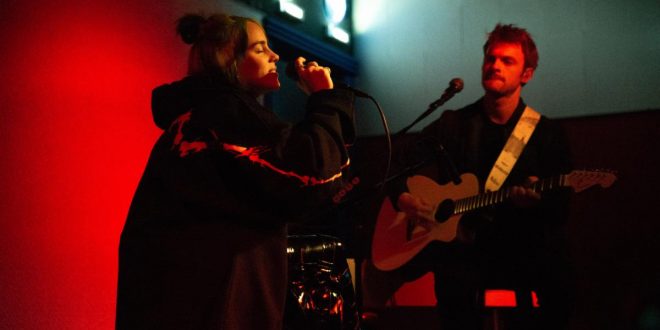 Darkroom/Interscope Records artist Billie Eilish, accompanied by her brother and chief collaborator, Finneas performed an intimate acoustic set for a room of excited fans and friends in The Blue Room at Nashville’s Third Man Records last night. The set was recorded live on Third Man’s direct-to-acetate system, and the vinyl version will be available in December only at Third Man retail locations in Nashville and Detroit. There will be a limited edition black & blue version for attendees only, featuring one-of-a-kind artwork created by Billie Eilish during her evening spent at Third Man headquarters.

Billie was introduced by Jack White, who said Billie is “someone we really love, and we think is really innovative and inspiring.” Before playing her final song of the night (“When the party’s over”), Billie Eilish praised Jack for “inspiring a whole generation of people to do what they want.”

It was a big year on the charts for six-time 2019 American Music Award nominee Billie Eilish. The 17-year old singer, songwriter and musician debuted at No. 1 on the Billboard 200 with her album When We All Fall Asleep, Where Do We Go. She scored her first No. 1 single on the Billboard Hot 100 with “bad guy,” which has since become the longest-running Hot 100 top ten hit by a female artist in the last century and the most-streamed song on Spotify throughout 2019*, amassing more than 3 billion global audio streams across all platforms, and climbing to No. 1 at Top 40 and Alternative radio. When We All Fall Asleep, Where Do We Go is now the second-highest selling album of 2019 and biggest North American debut album of the decade (male, female or group), shifting 313,000 units in its first week and hitting No. 1 on the Billboard 200 album chart for 3 nonconsecutive weeks. Billie has now earned more than 24 billion combined career audio and video streams, while her 2020 WHERE DO WE GO? World Arena Tour sold out of 500,000+ tickets within an hour of on-sale, beginning March 9, 2020. *excludes remixes

Music editor for Nashville.com. Jerry Holthouse is a content writer, songwriter and a graphic designer. He owns and runs Holthouse Creative, a full service creative agency. He is an avid outdoorsman and a lover of everything music. You can contact him at JerryHolthouse@Nashville.com
Previous SHOW REVIEW: The Music And Memories Of Don Williams
Next Sturgill Simpson Adds Tour Dates Including Bridgestone