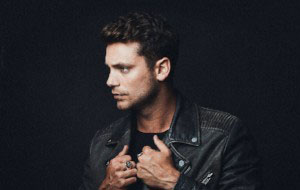 Singer/songwriter Bastian Baker returned to the United States this week to promote his recently released self–titled fourth studio/American debut album. After a successful run across North America as the acoustic opening act on Shania Twain’s Now world tour, he received a warm welcome back with media praising his latest work.

This week the Swiss singer-songwriter with a country twang has been traveling the globe with Twain whose tour will resume November 30 in Australia and wrap December 22 in New Zealand.

The platinum-selling recording artist’s soulful vocals have scored him MTV Europe Music Awards, World Music Awards, Swiss Oscars and more. Last night, he set his sights on new territory attending his first award show in the United States at the 52nd Annual CMA Awards in Nashville. Bastian chatted with Billboard on the red carpet about being the first Swiss to attend the star-studded event. Donned in Hugo Boss, Bastian earned “Best Dressed” nods from USA Today.

Influenced by the 850 shows he’s played in over 40 countries in the last seven years, his new album plays with genre, refusing to get pinned down to a singular aesthetic. Baker staked its claim at No. 1 in Switzerland, No. 2 in Belgium and No. 3 in Germany. The genre-defying project was brought to life by producers and songwriters around the globe including GRAMMY Award-winner Jacquire King (Shawn Mendes, Niall Horan, Kings of Leon, Bon Jovi). Bastian has penned a catalog of over 60 songs while in Nashville and holds a co-writing credit on each track of the new album.

Music editor for Nashville.com. Jerry Holthouse is a content writer, songwriter and a graphic designer. He owns and runs Holthouse Creative, a full service creative agency. He is an avid outdoorsman and a lover of everything music. You can contact him at JerryHolthouse@Nashville.com
Previous Mmhmm Premiere Video For The Number Song
Next Robert Earl Keen Releases “A Bigger Piece of Sky” On Blue Vinyl