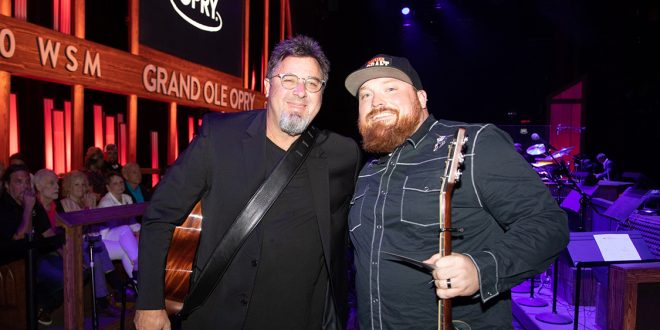 Country newcomer Austin Jenckes made his debut at the Grand Ole Opry recently performing three tracks from his brand new album If You Grew Up Like I Did . Overwhelmed with emotions and telling the crowd between songs, “I can’t tell you what this means to me to be here tonight,” the special Opry moment earned him two standing ovations .

Host Vince Gill noted in his introduction, “This gentleman is about to take this stage the same way I did. Just a man and his guitar and that’s really a beautiful thing.” Before prepping the crowd by proclaiming, “I love his voice.”

Jenckes first sang his album opener “We Made It,” (view clip here above) followed by “If You’d Been Around,” which he sang in honor of Father’s Day and dedicated to “anybody who’s lost somebody.” The song, which he wrote about his late dad who he lost at 16, was performed with his dad’s guitar that he also learned to play on.

Seeing the reaction of the crowd, Gill was moved to invite Jenckes to play a third song saying, “Man, I think these people would love it if you’d do one more song for us!”

Requesting the lead track from his album, “Fat Kid,” it again brought the packed Opry house to their feet.
Having just performed a series of shows for CMA Fest 2019, it was also recently announced Jenckes will headline the Nash Next stage at the Watershed festival in his home state of Washington later this summer, surrounded by select high profile shows before heading to the UK this fall.

Growing up in Duvall, Washington, a suburb of Seattle, Jenckes moved to Nashville six years ago to focus on being an artist and his songwriting. Since moving to Nashville, Jenckes started a family with his new wife. Previously named one of Rolling Stone Country’s “Artist You Need To Know” he’s performed alongside the likes o f Brothers Osborne, Lee Brice, The Cadillac Three and Ashley McBryde, while also having performed the National Anthem at his hometown Seattle Seahawks Stadium in front of 65,000 people. At the end of last year, Jenckes was awarded The ASCAP Foundation Harold Adamson Lyric Award in Country, in honor of his songwriting.

Music editor for Nashville.com. Jerry Holthouse is a content writer, songwriter and a graphic designer. He owns and runs Holthouse Creative, a full service creative agency. He is an avid outdoorsman and a lover of everything music. You can contact him at JerryHolthouse@Nashville.com
Previous Nashville Songwriters Hall Of Fame Announces 2019 Nominees
Next Jack Tempchin Announces Release Of 12th Solo Album