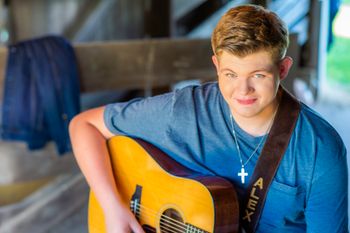 Rising Country star Alex Miller is carving a career path forward with his new single, “Through With You,” (Watch above)

The new single is outside the popular American Idol Season 19 alum’s usual comfort zone. This is a sad, serious ballad with a modern Country sound that deals with more mature themes than his previous outings. “I tried to take the advice that Luke Bryan and Katy Perry gave me on Idol and that was to reach a little bit, to see who I am as an artist and what really fits. This song is definitely a very different style for me, but at the same time it’s very true to me as it comes from a real personal experience. I hope they’ll be proud of me,” Alex notes. Miller wrote the song with his producer Jerry Salley. The single is from Alex’s upcoming debut album due out this spring on Billy Jam Records.

The powerful companion music video features a dual cinematic approach, as acoustic video performance footage alternates with film featuring Maria Montgomery (Kentucky Basketball TV & Radio host, Ford Super Model) and Tod Lanter acting out a relationship’s end. Shot in Hendersonville, Tennessee, locations include a deserted warehouse and an upscale suburban home. From the opening scenes of an angry young woman packing her bags to her partner’s descent into an alcohol-fueled fury and depression, the acting is believable and therefore heartbreaking. Miller’s shadowed solo performance is compelling and bittersweet, and the clip, directed by videographer Steve Kinney, is sure to garner attention.

“When Steve and I put our heads together for the video concept we knew we wanted to take the opportunity to show that alcohol abuse hurts not just the abuser, but all those around them as well. Abuse breaks everything – hearts, minds and bodies,” explains Miller.

Music editor for Nashville.com. Jerry Holthouse is a content writer, songwriter and a graphic designer. He owns and runs Holthouse Creative, a full service creative agency. He is an avid outdoorsman and a lover of everything music. You can contact him at JerryHolthouse@Nashville.com
Previous Del McCoury Drops “Almost Proud” Today
Next National Museum Of African American Music Celebrates One Year