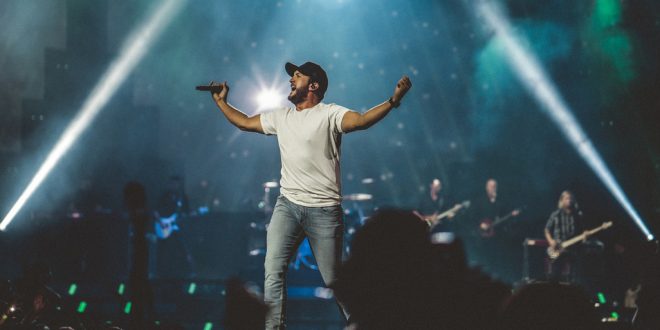 Reigning ACM Entertainer of the Year Luke Bryan played to a sold-out hometown crowd in Nashville’s Bridgestone Arena last night, the seventh stop on his “Proud To Be Right Here Tour” with dates scheduled through the fall. Dylan Scott and Caylee Hammack were the scheduled opening guests along with DJ Rock.

During Luke’s set Dylan and Caylee were brought back to the stage to perform “All My Friends Say” with him, both eagerly enjoying their first-ever performances at Bridgestone.

Fans were delighted by Luke’s planned surprise to have Jason Aldean join him as well as spontaneous showtime surprise guest appearances by Florida Georgia Line’s Tyler Hubbard and Morgan Wallen, who was warmly welcomed back to the stage by Luke’s fans.

At the close of the concert Luke exclaimed, “This has been one of the favorite nights of my life!”

Last night’s concert marks the fifth consecutive time Luke has sold-out Bridgestone Arena with back-to-back sold-out dates in the Arena in both 2013 and 2017.

In 2015 Luke became the only country act to sell out Vanderbilt Stadium joining an elite list of musicians like the Dave Matthews Band, Paul McCartney, Pink Floyd, the Rolling Stones and U2. In 2018, Luke’s concert on Broadway drew 30,000 fans to celebrate the grand opening of LUKE’S 32 BRDIGE FOOD + DRINK and in 2017 60,000 fans gathered in downtown Music City to see Luke perform from the rooftop of Tootsie’s Orchid Lounge as the Nashville Predators played game 6 for the Stanley Cup.

Music editor for Nashville.com. Jerry Holthouse is a content writer, songwriter and a graphic designer. He owns and runs Holthouse Creative, a full service creative agency. He is an avid outdoorsman and a lover of everything music. You can contact him at JerryHolthouse@Nashville.com
Previous LISTEN: First Single From Billy Strings New Album
Next Whiskey Jam Celebrates It’s 10th Anniversary