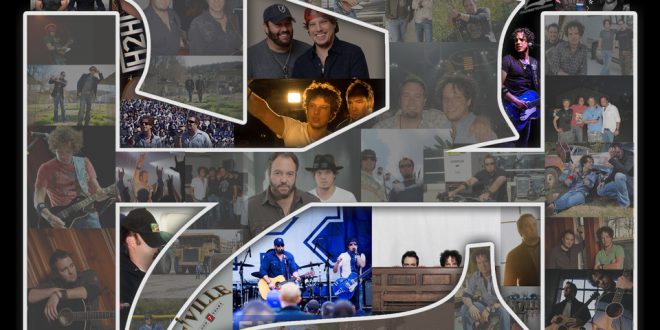 Were you nervous about putting out REDemptiOn? It’s your first in 10 years!

David: You never know what to expect releasing a new album, but I think it was more excitement about having new music out than nervousness.

What’s one perspective you brought to this album that perhaps you didn’t have before?

Chad: One new perspective that came with recording the REDemptiOn album is maturity in songwriting and our studio approach. We are more laser focused now on what we want and we know how to get it more strategically and efficiently.

This is the first Halfway to Hazard album in the age of streaming. How would you prefer people listen to it?

David: Anyway they want. Streaming is the future, but we do like to see people still buying the album for sure, but as long as they listen, we are good!

Do you think this band sound is different now, than it did to you in 2007?

Chad: I think H2H sounds better than ever, it’s the same mixture of country lyrics and rockin music blended with bluegrass type harmonies and a shake your head beat that we had on our 1st record from 2007. DT and I always have come from the same place musically with our influences, etc and being both from eastern KY gives us the same foundation to base our songwriting on.

For someone who was just being introduced to your music, what’s the first song they should listen to?

David: “Daisy,” it was our first single off the first album and it’s a great blend of our voices and our country/rock sound.

Will you be going on tour soon?

Chad: H2H really never stops touring, we are always trying to find opportunities to play live. I think it’s our strongest attribute. Hopefully we get a support slot with a great headliner in 2018 along with playing all the usual festivals, fairs and venues we play annually.

You recently played Christmas 4 Kids, Tracy Lawrence’s Turkey Fry concert to benefit Nashville Rescue Mission, and even have a charity link on your site. Why is it so important to you to give back?

David: Because we’ve been given so much. When you’re blessed to do this for a living then you have to give back.

Let’s talk a couple of minutes about your own impressions of Christmas. Do you have a family tradition you love to do each Christmas?

Chad: Christmas traditions for our house have just continued on from how my parents did things. We always decorate inside and outside with lights, trees, special family Christmas treasures like ornaments and windmills. There is always lots of food and Christmas music filling the house for weeks prior to the big day. We also like to deliver food and gifts to those less fortunate and celebrate the baby Jesus. It’s not just about gifts, it’s more about spirit and joy and of course watching a few classics on tv like A Christmas Carol, A Christmas Story, Christmas Vacation and all the cartoons.

David: Motorcycles or ATV’s. It was a staple of East KY life. Everyday we would get home from school and head up into the mountains.

Chad: I think my favorite Christmas movie would be a tie between A Christmas Story and Christmas Vacation. I literally can recite every line to both those movies, kind of scary. Haha. Or should I say Hohoho. You’ll shoot your eye out kid!

David: Turkey and yes huge dinner with all the family. Its great to get everybody together, eat the turkey and fall asleep.

What’s been your favorite album/song of 2017?

Chad: I’m always a huge fan of whatever Chris Stapleton puts out. His voice and songwriting really speak to me, plus it doesn’t hurt that he’s a good ole Eastern Kentucky boy like us. But I’d have to say the most impactful song of 2017 for me was “Better Me” by Montgomery Gentry. Obviously losing a close friend like Troy was very difficult but that song when they released it was so autobiographical for Troy and his growth as a man that it gave me a little peace. It’s very emotional to me every time it comes on, but that’s when music is in its finest element, forcing you to feel something with only sounds. That’s powerful. I miss ya buddy.

Name three things you are thankful for this year?

Now let’s talk about food. What was your favorite food to eat as a kid?

Chad: Well, I was an extremely picky eater as a kid, now I’m getting paid back for that, both of my kids are pretty picky. Ha. My go to as a kid was pepperoni pizza, Kraft Mac n cheese, hot dogs, certain kinds a spaghetti with meat sauce, occasional steak and baked potato. The weird thing is I never liked sweets as a kid, and really still don’t. But I would say my palate has changed quite a bit, I can really appreciate a fine meal now. They say your taste buds change every seven years, which makes sense, I love raw oysters and grilled salmon suddenly in the last couple years. Crazy!

David: Anything, you can fry anything and it’s great.

Chad: There has to be multiple condiments in my refrigerator at all times, Lea & Perrin’s Worcestershire Sauce, Tabasco, Martin’s BBQ sauce, prob some squeeze Mayo. I burned myself out on ketchup as a kid. It’s never been the same.

David: Medium rare, oscar style with a side of lobster.

What foods do you dislike?

Chad: I’m not a huge mushroom fan, don’t like straight anchovies, and I don’t love chicken salad. I’ll pretty much give anything a shot. Definatly not some of that crazy stuff that I see online like eating live things or rodents, bugs, or worms. I’m out on that!

The cities with the best food include…

David: Nashville, the food is as good as the music! Lexington Ky, Tony’s is the best steakhouse in the country!

Chad: hmmm, I’d like to eat some Nashville hot chicken, maybe some biscuits and sausage gravy with Jimi Hendrix or maybe have sushi and cold sake with Paul Mccartney or pizza, beers and bourbon shots with Hank Jr and Kid Rock. It’s hard to pick!

About Halfway to Hazard

Halfway to Hazard is an American country music duo composed of singer-songwriters David Tolliver and Chad Warrix. Though Tolliver and Warrix grew up in different towns in southeastern Kentucky, their group originated in Hazard, Kentucky, which was halfway between their hometowns. The group’s debut album, Halfway to Hazard, peaked at #14 on the Billboard Country Albums chart, landing them a Top 20 album straight out of the gate. Byron Gallimore and country music superstar Tim McGraw co-produced the project. Included on the album was their debut single, “Daisy,” which earned them a Top 40 hit on the Billboard Hot Country Songs chart in 2007. As a songwriter, Tolliver has penned songs that were later recorded by Tim McGraw, Brantley Gilbert, Jerrod Niemann, and more.

Previous TRACE ADKINS REAFFIRMS HIS STEADFAST PATRIOTISM IN “STILL A SOLDIER”
Next Musician, Singer-Songwriter, & Foodie, Ruthie Collins, Takes us on a Food Tour of East Nashville