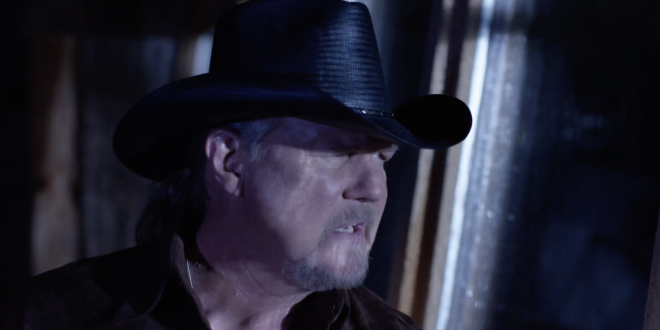 Trace Adkins released his video for “Love Walks Through The Rain” featuring Melissa Etheridge. Making its Paramount Times Square Billboard in New York City reveal yesterday (12/7), the dark and stormy music video was produced and directed Mike Stryker and Andrew Rozario. The clip displays a distraught couple in a darkened house battling their own emotional elements, nearly succumbing to the pain of a fight. But with Adkins and Etheridge narrating, they soon find shelter from the wind and rain of turmoil, ready to carry on once more.

“As I have often said, my favorite videos are those that follow the storyline of the song,” Adkins shared with CMT. “This one is no different. The directors, Mike Stryker and Andrew Rozario, did a great job of letting the music tell the story.”

Music editor for Nashville.com. Jerry Holthouse is a content writer, songwriter and a graphic designer. He owns and runs Holthouse Creative, a full service creative agency. He is an avid outdoorsman and a lover of everything music. You can contact him at JerryHolthouse@Nashville.com
Previous Kenny Chesney’s “Here And Now 2022 Tour” Is No. 1 Country Tour
Next Broken Bow Records Named No. 1 Airplay Label