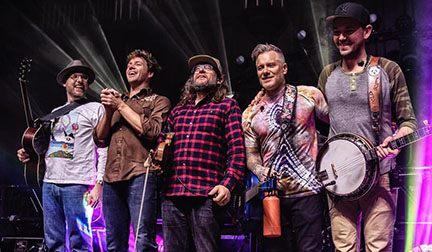 The Infamous Stringdusters just released “I’m Not Alone” from their new album Toward the Fray (watch video above.) The song came together when early in the pandemic, Stringduster Travis Book was live-streaming on Instagram, playing with a musical idea. Paul Hoffman of Greensky Bluegrass was tuned in and he latched on to something Travis said about having repainted his house, but underneath it all, there was still evidence of the old paint. “I was so grateful for this song when it came out of the ether. It was reassuring to remember that I was indeed not alone. But the compelling part of the song for me is the realization that no matter how many times we try to remake ourselves, just painting over the facade doesn’t really change what’s underneath.”

In addition to the “I’m Not Alone” video, the Stringdusters have released a cover of the Grateful Dead’s “Black Muddy River” featuring Anders Osborne in recognition of what would have been legendary frontman Jerry Garcia’s 80th birthday. Speaking on how this cover came to life, Stringduster Andy Falco says “I’ve always loved hearing Jerry sing this song back in the day. When we were looking for something to do with Anders, it’s one he was particularly fond of as well, so we thought it would be the perfect song to record in honor of Jerry during this year’s Days Between (festival). Anders is such an amazing singer, I’ve been a fan of his for a long time. Needless to say it was a real treat to get to sing it with him.” Watch the video below.
Look for The Infamous Stringdusters Oct. 9 at the Caverns in Pelham, TN.

Music editor for Nashville.com. Jerry Holthouse is a content writer, songwriter and a graphic designer. He owns and runs Holthouse Creative, a full service creative agency. He is an avid outdoorsman and a lover of everything music. You can contact him at JerryHolthouse@Nashville.com
Previous Chris Young Celebrates Double Platinum
Next Jason Aldean Celebrates 3 Weeks At Number One