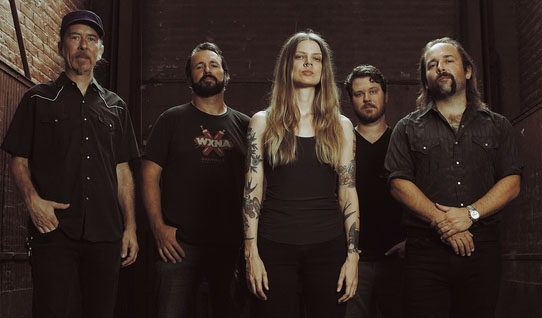 Sarah Shook & The Disarmers have released the video for their new track “No Mistakes”, off their third album Nightroamer, out February 18th on Thirty Tigers. Nightroamer finds North Carolina-based group enhancing their sonic palette with infectious melodies and a tasteful infusion of elemental pop. Sarah Shook & The Disarmers has just announced additional spring tour dates including a stop at Mercy Lounge on 3/19.

On “No Mistakes”, the reminds us of where they came from with the honky-tonk influenced track and video, set in a lively bar featuring Shook and The Disarmers performing. The clip opens with Shook looking back fondly on an evening at the bar with a love interest and the joy they shared in conversation, dancing and just being in the moment. “I’ve had my share of jealous and insecure partners and I know I’m not alone in that”, says Shook. “’No Mistakes’ takes aim at such folks with the message to get a damn grip and grow the hell up. If you’ve been mistreating your partner, quit pretending they’re the problem. Own up to your shit. Apologize, mean it, work hard on yourself. Hope like hell they give you another chance but know they don’t owe it to you.” Watch the video above.

Shook offers more insight, “People get trapped in cycles of serial monogamy with people who tear them down all the time. It’s more common than we’d like to admit and a lot of people never get out of that trap.” She continues, “I wanted the video for “No Mistakes” to portray some of the good things one kind of healthy relationship can offer: true joy, deep friendship, shared interests, where both partners respect and value themselves and each other. No codependency. No manipulation. No controlling behavior. Just straight up love.”

Music editor for Nashville.com. Jerry Holthouse is a content writer, songwriter and a graphic designer. He owns and runs Holthouse Creative, a full service creative agency. He is an avid outdoorsman and a lover of everything music. You can contact him at JerryHolthouse@Nashville.com
Previous Songwriter Shane Stevens Scores Grammy Nomination
Next Kenny Chesney Celebrates His 34th Number One