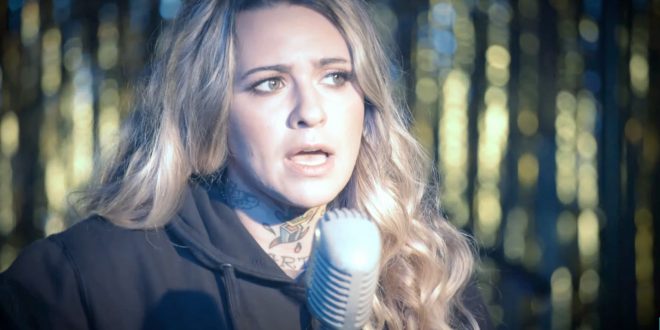 Morgan Wade grew up keeping her writing and her singing to herself, convinced her voice, which differed from those coming from country radio, wasn’t good enough to share.

“Honestly, I think that was really good for me,” Wade shares. “It made me think, ‘Alright, well, I’m not going to sing for anybody else – I’m singing for myself.’ I think it just takes a while. After spending all those years feeling like I wasn’t good enough, it takes time to rewire your brain–it’s been an incredibly therapeutic. By sharing my journey and stories from my more reckless days, I hope it’s a way for others to get to know me, too.”

“I guess what I most would like people to take from this song is that we are the toughest on ourselves. I feel there is a part of me I see — and a part I let others see,” Wade shares. “To me, it’s about killing the ego and being yourself. And allowing yourself to feel what you feel and not be ashamed that you’re struggling. In the midst of falling apart, I’ve found myself. I hope others can, too.”

“I wanted this to be the single because this time of year is tough on people with the time change, colder weather, holidays and then to top it off a pandemic,” she continues. “If one person can hear this, and connect with it, then I’ve done my job.”

A Floyd, Virginia native, Wade grew up surrounded by bluegrass, but she possesses an affinity for pop and rock in her writing, melding her influences to create a sound uniquely her own, catching the attention of Sadler Vaden, long-time guitarist for Jason Isbell as well as an acclaimed solo artist. With Vaden as producer and Paul Ebersold as engineer, the trio worked together on a new set of songs, spread out over the course of two separate weeks in the studio, shaping songs Wade has written over the years and developing brand new tracks.

“Recording this song was natural and a breeze with Paul and Sadler,” Wade explains. “The lyrics for ‘Don’t Cry’ literally came to me in the studio. I heard the track music play, and I immediately wrote the words down. I was in a dark place during that time, and that song really was exactly how I felt in that moment.”

Opening with sustained feedback on a single note in “Don’t Cry,” Wade then comes in with her acoustic guitar singing:

Leading into a full band hit with the chorus:

Wade, now 26, only began performing in public seven years ago at 19, when she put her backing band the Stepbrothers together via Craiglist and discovered she loved the stage. Since then, the singer-songwriter has taken her writing and her voice public, with Whiskey Riff declaring, “Morgan combines a powerful, bone-chilling voice with close-to-the-heart lyrics and open, honest songs about the struggles of everyday life and love…every fan who wants their music real, raw and true, can find solace in Morgan Wade.”

With more new music on the horizon, fans can expect to become better acquainted with Wade through the songs she’s written while getting to know herself.

Music editor for Nashville.com. Jerry Holthouse is a content writer, songwriter and a graphic designer. He owns and runs Holthouse Creative, a full service creative agency. He is an avid outdoorsman and a lover of everything music. You can contact him at JerryHolthouse@Nashville.com
Previous Drive-By Truckers Drop 13th Studio Album “The New OK”
Next LISTEN: Barry Gibb and Dolly Parton – “Words”