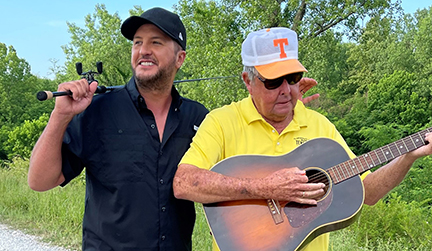 The video was shot at Luke’s farm outside of Nashville and features his sons Bo and Tate with cameos by all three of the co-writers. Luke co-directs for the first time, along with Michael Monaco of FlyHi Films who has now directed eighteen music videos for Luke since 2013. Michael is also the executive producer and director of Luke’s original five-part docuseries “Luke Bryan: My Dirt Road Diary.”

There is a lyric in the song, ‘There’s a lot of heroes out there these days, but if you ask me mine, there’s only one name I’ll say.’ That seems to sum up Luke’s adoration for the world-renowned angler as is evident throughout the video.

Dance is likely the most famous fishermen in the world who began competing and winning bass tournaments in the mid ’60s. That success led to a sponsorship deal with a lure manufacturer who encouraged him to begin a TV show to help promote the product. Since 1968, “Bill Dance Outdoors” has aired over 2,000 shows and Bill has produced over 36 educational videos and 12 audio educational tapes on a variety of subjects. His hilarious out-take shows have been aired all over the world. His tv shows Bill Dance Outdoors airs on the Outdoor Channel and Bill Dance Saltwater airs on the Sportsman Channel.

“Bill Dance” and Luke’s new radio single “Up” both appear on the Deluxe edition of his BORN HERE LIVE HERE DIE HERE album. All five previous singles from the album have reached #1: “Waves,” “Down To One,” One Margarita,” “Knockin’ Boots,” and “What She Wants Tonight.” This is the second time Luke has released six singles deep off an album. His 2015 Kill The Lights record contains six consecutive #1 singles: “Kick The Dust Up,” “Strip It Down,” “Home Alone Tonight,” “Huntin’, Fishin’ & Lovin’ Every Day,” “Move,” and “Fast.”

Luke takes his Proud To Be Right here to Los Angeles tomorrow with a show at the Staples Center and continues his west coast run through next week.

Music editor for Nashville.com. Jerry Holthouse is a content writer, songwriter and a graphic designer. He owns and runs Holthouse Creative, a full service creative agency. He is an avid outdoorsman and a lover of everything music. You can contact him at JerryHolthouse@Nashville.com
Previous CMA Awards Will Return To Bridgestone Arena
Next Lauren Alaina Will Flip The Switch When Opry Goes Pink