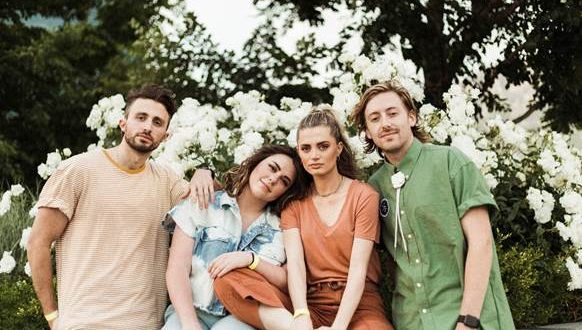 Watch: “Lights In The City” From The National Parks

Indie-folk-pop band The National Parks are gearing up for an east coast run of co-headlining tour dates with LA-based trio WILD this September that will be stopping in Nashville on Friday, September 6th at Exit/In. Tickets are on sale now; visit www.thenationalparksband.com for ticketing information.

In anticipation of the upcoming tour, The National Parks released a new video yesterday (August 6th) for their electro-folk-pop single “Lights In The City,” featuring live footage from a handful of recent tour dates including their hometown of Provo, UT. The track – whose chorus chants, “In the lights of the city everything moves, everything moves; everything stops when I’m with you” – appears on the band’s latest full-length album, Places. Watch video above.

“The video for ‘Lights In The City’ is special to us because it represents the excitement we feel every time we step on stage,” shares lead vocalist/guitarist Brady Parks. “‘Lights,’ as we call it, was written during a crazy and exciting time in my life when I was graduating college, moving to a new city and beginning a new relationship. Life was a whirlwind at the time with the unknown ahead. As soon as I wrote the song, I couldn’t wait to play it live and it quickly became one of our favorites to perform at shows because of the way the crowd makes it come to life in a whole new way.” Parks adds, “Much like where I was at in life when I wrote the song, touring and playing shows across the country and pursuing this dream of music is crazy, scary, exciting and beautiful. The unknown is ahead but the constant is our love for our fans and the joy we feel when we get to step on a stage.”

Music editor for Nashville.com. Jerry Holthouse is a content writer, songwriter and a graphic designer. He owns and runs Holthouse Creative, a full service creative agency. He is an avid outdoorsman and a lover of everything music. You can contact him at JerryHolthouse@Nashville.com
Previous Rodney Crowell’s “Texas“ Is Star Packed
Next “Exile – The Garage Tapes” Due Out August 16