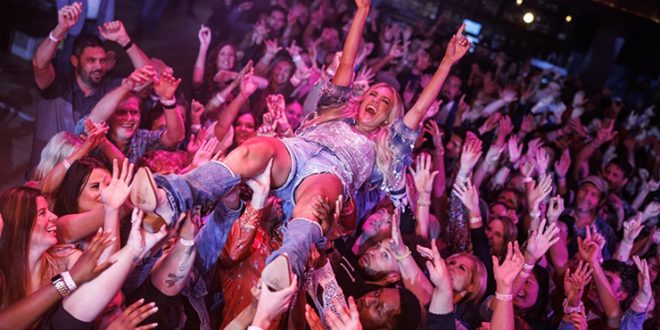 Amidst the first leg of her 43-City THE DENIM & RHINESTONES TOUR, Carrie Underwood releases the official music video for her new single “Hate My Heart,” which was #1 most added at Country Radio this week. (Watch above).

Directed by Shaun Silva, who recently directed Underwood and Jason Aldean’s music video for their multi-week #1 smash hit duet, “If I Didn’t Love You,” and filmed on location at Nashville’s Wildhorse Saloon, “Hate My Heart” follows Underwood and a group of her girlfriends who are all approaching break-ups in different ways. Whether drowning themselves in rom-coms, diving into dating apps, taking a deep dive into online shopping, taking out their frustration and aggressions in the gym, or getting revenge, Underwood and her girl posse are united in a mission to move past their heartbreak to indulge in a wild and crazy girls’ night out. In the video, Underwood rides a mechanical bull and crowd surfs as she and her friends see their own alter-egos in the all-female band onstage.

Underwood co-wrote “Hate My Heart” with frequent collaborators Hillary Lindsey and David Garcia, as well as hit artist/songwriter Hardy. It is the latest single from Underwood’s current album Denim & Rhinestones, which was released in June and is the latest collaboration with Garcia, with whom she also co-produced her 2018 release, Cry Pretty and her 2021 GRAMMY® Award-winning album of gospel hymns, My Savior. Listen to “Hate My Heart” now.

Underwood is nominated for three awards at the upcoming CMA Awards on November 9, including Entertainer of the Year, Female Vocalist of the Year, and Musical Event of the Year for the multi-week #1 smash hit, “If I Didn’t Love You” with Jason Aldean, where she will also be performing new single “Hate My Heart.”

Music editor for Nashville.com. Jerry Holthouse is a content writer, songwriter and a graphic designer. He owns and runs Holthouse Creative, a full service creative agency. He is an avid outdoorsman and a lover of everything music. You can contact him at JerryHolthouse@Nashville.com
Previous LISTEN: Luke Bryan’s “Prayin’ In A Deer Stand”
Next The Future Nashville Skyline