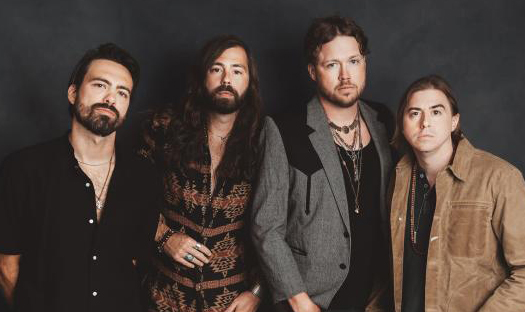 A Thousand Horses just released “Broken Heartland” with an accompanying music video. (listen above) Directed by Jimmy Fisco, the cinematic clip unfolds in a series of flashbacks, telling the story of a once-thriving relationship that’s steadily gone downhill. Over the course of three minutes, we see the happy couple laughing together at an all-night diner, walking the city streets hand-in-hand, and slow-dancing in an empty room. During the clip’s final moments, though, the male character sits alone at a bar, dejected, trying in vain to drink away the heartache. Behind him, A Thousand Horses kick up plenty of dust on the barroom’s stage, charging their way through a Country-Rock anthem that contrasts its heartbroken lyrics with the rush of ringing guitars and charging tempos

“It’s the best of both worlds,” says frontman Michael Hobby, who joined his bandmates in releasing “Broken Heartland” on the group’s own record label, Highway Sound. “The song is about a sad, lonely place where you’re feeling beat down from a relationship — we’ve all been there — but we wanted to make it rock, too. It feels energetic while still having all that tension and angst.”
Produced by Grammy award-winner Dave Cobb, “Broken Heartland” is a bright song about darker moments. It also marks the band’s first new release since 2020’s “A Song To Remember,” which has earned more than 11 MILLION streams on Spotify alone.

“We owe this to our fans,” Hobby adds. “They’ve supported us since Day One, and we want to put as much new music into their hands as we can. That’s why we’re so excited about releasing music on our own label. It’s why we’re so excited about continuing to write songs that are authentically us. The music we’re making now is our journey and our story — all the years of us being friends, being in a band, experiencing the highs and the lows together — and we’ve put that story into the only place we know to put it: the songs themselves.”
With the surprise drop of the track “Broken Heartland” on June 24, the band is cooking up more exciting news to be announced soon.

Hailing from Nashville, Tennessee, A Thousand Horses made history in June 2015, when the band’s “Smoke” became the first debut single for a group to reach No. 1 on the Country airplay charts in the 2010s. The song went PLATINUM, with the follow-up hit “(This Ain’t No) Drunk Dial” also cracking Top 40 success.

Music editor for Nashville.com. Jerry Holthouse is a content writer, songwriter and a graphic designer. He owns and runs Holthouse Creative, a full service creative agency. He is an avid outdoorsman and a lover of everything music. You can contact him at JerryHolthouse@Nashville.com
Previous The Other Nashville Society Celebrates 5 Years
Next Emotional Moment At The Opry For Jelly Roll