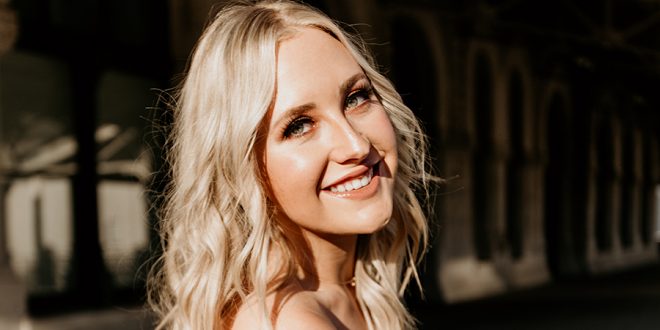 Up and coming country singer-songwriter, Tori Martin is dreaming of an “Old Fashioned White Christmas” with the release of her brand new single of the same title. Listen here .
The track was co-written with John Cirillo, Daniel Reifsnyder  and was produced by Jake Saghi. The sentimental lyrics and down-home feel paired with Martin’s stacked harmonies take listeners down memory lane as they ring in the holidays and create new memories. Martin added, “‘Old Fashioned White Christmas’ was inspired by the great classics… our favorite Christmas songs! It makes me feel nostalgic and in anticipation of one of the most amazing days of the year. Hoping it spreads Christmas cheer!”
The Texas-native moved to Nashville in 2017 to follow her musical dreams and continues to tour across the country. Martin has already achieved success on the Texas Country charts. Her songs “From Here to There” (#22), “Done Deal” (#19), and “Woman Up” (#20) are all favorites amongst her fans. Growing up in Azle, Texas, the 25-year-old has always had a passion for music. She began singing in church as a child and was heavily influenced by her country music-loving Paw-Paw, who bought Martin her first guitar. Growing up on classics like Johnny Cash and Tammy Wynette, “Stand by Your Man” was the first song she learned to sing and at age 14, she began performing at opry houses around Texas. She recorded her first EP, Falling Straight Up in Nashville at age 16 and played her first headlining concert that same year. Noting Dolly Parton, Whitney Houston, and Stevie Nicks as her musical inspirations, Martin has become known for her powerhouse vocals and sincere songwriting. In 2014, she was named one of the “New Faces of Country” by Renegade Radio Nashville and was a contestant on Season 14 of American Idol. The following year, she was nominated for “New Female Vocalist of the Year” at the Texas Regional Radio Music Awards. She also performed at Taste of Addison, headlined by Granger Smith, in 2017.
Martin is excited about 2020. She has been busy writing and has started recording songs for her new project to be released in the New Year. Martin also co-hosts the “Music Biz Besties Songwriter’s Series” at Just Love Coffee in Nashville.  Be sure to catch her on one of these upcoming shows. Additional tour dates to be announced soon.

Music editor for Nashville.com. Jerry Holthouse is a content writer, songwriter and a graphic designer. He owns and runs Holthouse Creative, a full service creative agency. He is an avid outdoorsman and a lover of everything music. You can contact him at JerryHolthouse@Nashville.com
Previous 2019 Christmas 4 Kids Spreads The Christmas Love
Next Golf Equipment Company Announces Darius Rucker As Newest Ambassador