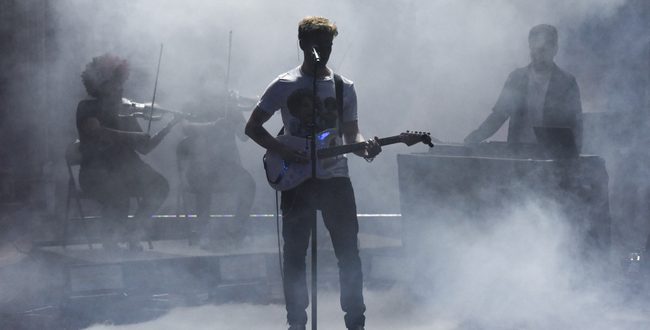 “I Feel Like I’m Drowning,” the single from rising star Two Feet, is currently #1 on Alternative radio. Streamed more than 50 million times to date.
An iHeart On The Verge artist, “I Feel Like I’m Drowning” impacted Alternative on January 23 of this year and climbed to #1 over the course of 23 weeks, making its chart debut on February 19. All 75 Alternative stations in the country added the song over the course of the campaign, and the song has been a Top 10 gainer single every week since April 2.
In addition to several festival and headline dates this summer, Two Feet will tour North America with Panic! at the Disco next year including a stop at Bridgestone Arena on January 25th. Tickets are on sale now, see full details below.
Two Feet is native New Yorker Bill Dess. A vocalist, guitarist and producer, Two Feet’s rise to prominence began with “Go Fuck Yourself,” which became an overnight hit on SoundCloud, amassing over 8 million streams in its first days online, with more than 250 million streams to date. Since signing to Republic Records last fall, Two Feet has appeared on numerous festival stages including Bonnaroo, Austin City Limits, Governor’s Ball, and SXSW as well as over 20 sold out shows worldwide including in New York, Los Angeles, London, and Berlin. Further new music from Two Feet is imminent.

Music editor for Nashville.com. Jerry Holthouse is a content writer, songwriter and a graphic designer. He owns and runs Holthouse Creative, a full service creative agency. He is an avid outdoorsman and a lover of everything music. You can contact him at JerryHolthouse@Nashville.com
Previous Bluegrass Music Hall of Fame & Museum Grand Opening October 19th
Next Billy Ray Cyrus Releases “The Goddess of Democracy”