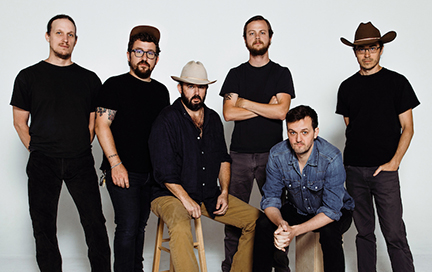 Town Mountain will release their new album Lines in the Levee on October 7th, 2022 via New West Records. The 11-song collection was produced, engineered, and mixed by the multiple Grammy Award nominated Justin Francis at Ronnie’s Place in Nashville, TN. Hailing from Asheville, NC, Town Mountain is the sum of all of its vast and intricate influences — this bastion of alt-country rebellion and honky-tonk attitude pushed through the hardscrabble Southern Appalachian lens of its origin. Lines in the Levee follows 2018’sNew Freedom Blues and is the first to feature the addition of drummer Miles Miller (of Sturgill Simpson musical lore).

The hearty base of Town Mountain’s music is classic country, old school rock and roll, and traditional string bands. Both on stage and on record, the group’s wide-ranging influences like The Band, Grateful Dead, Bill Monroe, Townes Van Zandt, Chuck Berry, John Hartford, and more can be heard. Lines in the Levee is a bona fide workshop in the seamless blend of Americana, country, bluegrass, and folk roots — this crossroads of deep influences and cultivated visions each band member brings to the table. Guitarist Robert Greer says “This is the sound we’ve been working towards since the inception of the band. It isn’t a departure, it’s an evolution — the gate is wide open right now.”

Listen to “Seasons Don’t Change” above. Town Mountain’s Jesse Langlais said of the song, “Change is constant, change is inevitable, change is here and now. It’s not hard to see that the human race is playing a massive role in climate change. All you have to do is read the paper, watch the news or just step outside. Floods, fires, melting roads, rising sea levels, drought, and the question that looms over us everyday, what’s next? “Seasons do change’ is what my daughter tells me when she listens to this song, and for now they still do. Although they certainly bleed together. I can’t really tell when Summer starts and Spring ends. I hope, for her and the following generations, that we can somehow manage the trouble that’s coming their way.”

Town Mountain has also announced their initial tour dates in support of Lines in the Levee. The tour features an album release party at the historic Station Inn in Nashville on 10/5.

Music editor for Nashville.com. Jerry Holthouse is a content writer, songwriter and a graphic designer. He owns and runs Holthouse Creative, a full service creative agency. He is an avid outdoorsman and a lover of everything music. You can contact him at JerryHolthouse@Nashville.com
Previous Oak Ridge Boys Announce 39th Annual Christmas Show At Opryland
Next Kasey Chambers Covers Eminem’s “Lose Yourself”