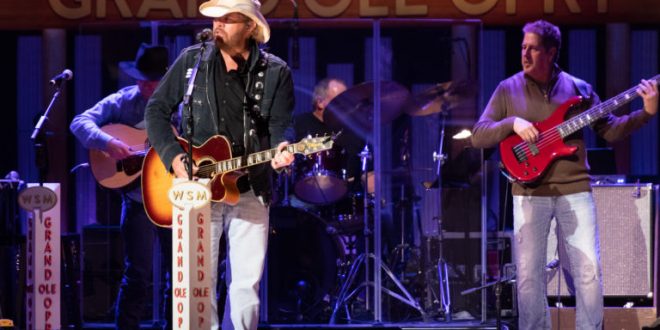 Toby Keith performing at the Grand Ole Opry at The Ryman on December 7, 2018 Photo by Chris Hollo

Toby Keith Has Many Reasons To Celebrate

Closing this year with the 25th anniversary re-release of his debut album, singer, songwriter, and entertainer Toby Keith has had an epic start to December in Nashville.
On December 5, BMI celebrated the 25th anniversary of “Should’ve Been A Cowboy” and Keith’s self-titled debut album with a gala at their Nashville facility. Two days later, Keith performed twice as the historic Ryman Auditorium hosted consecutive Grand Ole Opry shows. And the Nashville Symphony honored Keith with its Harmony Award the following night, December 8. In addition to being recognized for his career contributions to music, Keith performed with the symphony at the event.
The connection began in May when Keith attended Eastwood’s golf tournament in Carmel, CA, and the two shared a cart. Toby asked Clint what he was doing next, to which Clint replied, “Funny you should ask, I am leaving tomorrow to shoot a movie for three months called The Mule.” Clint told him the storyline and Toby asked, “How do you do it, man?” Clint said, “I just don’t let the old man in.” With the movie in mind and the line Eastwood told him, Keith wrote the song and sent it to Clint, who loved it and decided to roll credits with it.
The busy month follows the release of Toby Keith – Should’ve Been A Cowboy [25th Anniversary Edition], which celebrates the debut album of arguably the most successful self-directed artist of his era – songwriter, vocalist, musician, producer, entertainer. The originally self-titled collection spawned four hit singles including his No. 1 debut “Should’ve Been A Cowboy.” As solo writer on the song, Keith began a career that would eventually see him standing shoulder-to-shoulder as a writer/artist with the likes of Dolly Parton, Merle Haggard, Willie Nelson, Van Morrison and Gordon Lightfoot as a member of the Songwriters Hall of Fame.

Music editor for Nashville.com. Jerry Holthouse is a content writer, songwriter and a graphic designer. He owns and runs Holthouse Creative, a full service creative agency. He is an avid outdoorsman and a lover of everything music. You can contact him at JerryHolthouse@Nashville.com
Previous Singers, Songwriters Gather For Bryan Wayne’s Album Release
Next Eric Heatherly Ties The Knot