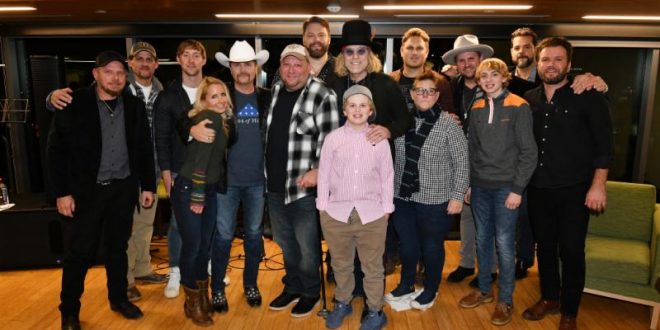 Singers, songwriters, friends and relatives recently gathered at SESAC for the release of Bryan Wayne’s  While You Wait album. Diagnosed with terminal ALS (Lou Gehrig’s disease) last year, Bryan recorded the album for his wife, two boys and an industry that continues to support his dreams. The 14-song collection is available at http://www.bryanwaynemusic.com .
“I made this record, because I knew I’d lose my voice and I wanted my boys, friends and family to hear me singing my songs forever no matter what,” said Bryan. “So many friends and family over the years had asked me when was I ever going to make a record of my own too, so here it is!”
Several of his  While You Wait co-writers joined him on stage to give voice to the songs Bryan recorded soon after his diagnosis. Six-time ASCAP Songwriter of the Year Ashley Gorley performed the title cut, and GRAMMY winner and 2004 ASCAP Songwriter of the Year Neil Thrasher sang “Just Wouldn’t Leave It Alone.” GRAMMY-nominated songwriter Bonnie Baker sang the moving “No More Rainy Days,” Jason Blaine performed “Slow Time Down” and Joanna Janet performed “Fly.” Big & Rich wrapped up the evening performing Bryan’s single, “Simplify” with James Otto, Janet and others on stage.
“ALS has taken my ability to sing, so I was honored my friends and co-writers stepped in to perform,” Bryan added. “I was blown away to see so many people show up and lend their support. This industry has been good to my family and me, and I hope these songs inspire people for many years to come.”
WHILE YOU WAI was recorded in Big Kenny’s Last Dollar studio, Starstruck Studios, and Dave Brainard’s deciBel studio in Berry Hill. Bryan Wayne and Brian Kolb co-produced the project and subsequently mixed it at Kolb’s THE CABIN studio.
Donations may be made to Bryan Wayne Galentine and Family by sending a check made payable to Bryan Wayne Galentine to:
Bryan Wayne Galentine
c/o Chris Burch
1012 16th Avenue South
Nashville, TN 37212
AGofundme account has also been set up at https://www.gofundme.com/thebwaynetrain .
Bryan Wayne “WHILE YOU WAIT” Track listing and co-writers
1. Wake Up World- Greg Bieck, Bryan Wayne
2. Still Beautiful- Christy Hoskins, Casey Moynihan, Bryan Wayne
3. While You Wait- Ashley Gorley, Bryan Wayne
4. A Good Day- Bryan Wayne
5. Simplify- John Rich, Big Kenny, Bryan Wayne
6. No More Rainy Days- Bonnie Baker, Bryan Wayne
7. Fly- Big Kenny, Bryan Wayne
8. The Forever Kind- David White, Bryan Wayne
9. Closer To Heaven- Jason Blaine, Tebey Ottoh, Bryan Wayne
10. Priceless- Chris DuBois, Bryan Wayne
11. Keep On Livin’- Jennifer Kennard, Adam Shoenfeld, Bryan Wayne
12. Just Wouldn’t Leave It Alone- Neil Thrasher, Bryan Wayne
13. Slow Time Down- Jason Blaine, Noah Gordon, Bryan Wayne
14. What If She’s An Angel- Bryan Wayne

Music editor for Nashville.com. Jerry Holthouse is a content writer, songwriter and a graphic designer. He owns and runs Holthouse Creative, a full service creative agency. He is an avid outdoorsman and a lover of everything music. You can contact him at JerryHolthouse@Nashville.com
Previous “CMA Country Christmas” Airs Tonight 7:00 PM/CT
Next Toby Keith Has Many Reasons To Celebrate