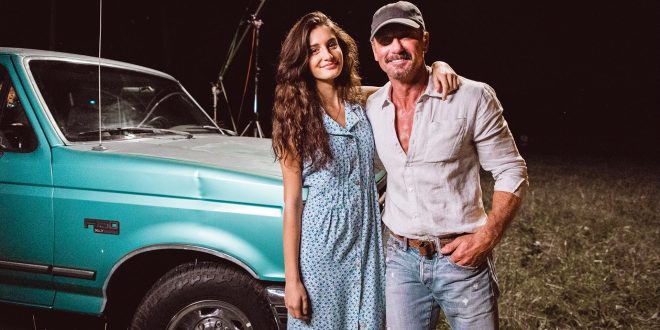 Tim McGraw will release his first music video since 2018 for his single “7500 OBO” from his album Here On Earth which was released last summer via Big Machine Records. The video will premiere on YouTube this Friday, August 13 at 6pm ET with a YouTube Premium-exclusive afterparty starring Tim and the video’s two directors, Alexa and Stephen Kinigopoulos talking about the video. Making her acting debut starring in her first music video is Tim and wife Faith Hill’s daughter Audrey McGraw.

Here On Earth, McGraw’s 16th studio album, debuted at #1 on the Billboard Country album chart, marking his 4th straight decade with a #1 album on the Billboard Country Album chart. The album was his 19th worldwide #1 and his 17th U.S. #1, tying him for second most #1 albums in the U.S., just behind George Strait. The album was also re released in spring with an additional set of songs as the Here On Earth Ultimate Edition to add to the musical tapestry of life presented in the original album.

Music editor for Nashville.com. Jerry Holthouse is a content writer, songwriter and a graphic designer. He owns and runs Holthouse Creative, a full service creative agency. He is an avid outdoorsman and a lover of everything music. You can contact him at JerryHolthouse@Nashville.com
Previous Bonnaroo Announces Grand Ole Opry Line-up
Next Chase Rice Hits The Top Of The Charts