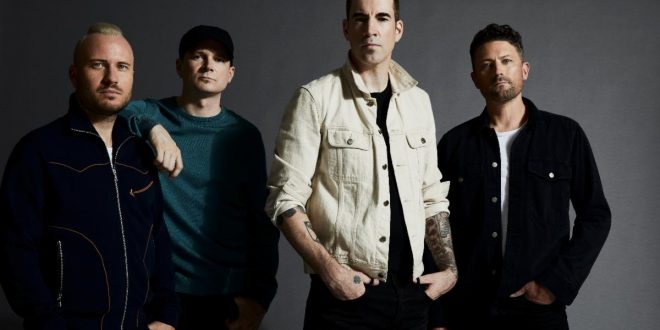 Multi-platinum band Theory (Theory Of A Deadman) has officially reached #1 at radio this week with their hit single “History of Violence,” off their newly released album Say Nothing, marking the band’s sixth #1 on the Mediabase Active Rock Chart and fourth #1 on the Billboard Mainstream Rock Chart. The powerful single, which has racked up more than 8 million collective streams , turns the tables on a story of domestic violence. Watch the gripping video (above) for “History of Violence,” illustrating a searing snapshot of a woman enduring an abusive husband as she plans to fight back, eventually ending up in jail but free of her abuser. With the song and video, Theory has been encouraging anyone affected by domestic abuse to call the National Domestic Violence Hotline (1-800-799-7233) for help. For the band’s upcoming U.S. dates, Theory has partnered with PLUS1 to donate $1 from every ticket sold to organizations dedicated to breaking the cycle of domestic violence and building a community free of abuse.

Say Nothing, out now via Atlantic Records, debuted at #2 on the Billboard Alternative Albums chart and #3 on the Rock Albums Chart as well in the Billboard Hot 200. On release day, the album also entered the iTunes Rock Albums Chart at #1 and the iTunes overall Top 200 Albums Chart at #6 . The 10-track collection, their seventh studio album, finds Theory speaking up through timely lyrical commentary that finds the band’s finger on the pulse of the current climate and the issues that our society is grappling with today including domestic violence, racism, the divisiveness in American politics, and anxiety and depression, all threaded together with a message that’s both a cautionary warning and a hopeful wish for our collective future.

The band will be at Brooklyn Bowl in Nashville on Thursday, April 9th.

Music editor for Nashville.com. Jerry Holthouse is a content writer, songwriter and a graphic designer. He owns and runs Holthouse Creative, a full service creative agency. He is an avid outdoorsman and a lover of everything music. You can contact him at JerryHolthouse@Nashville.com
Previous “Love Lives On” Listening Party A Much Loved Event
Next Chris Stapleton Makes Surprise Appearance At Tyler Perry Show