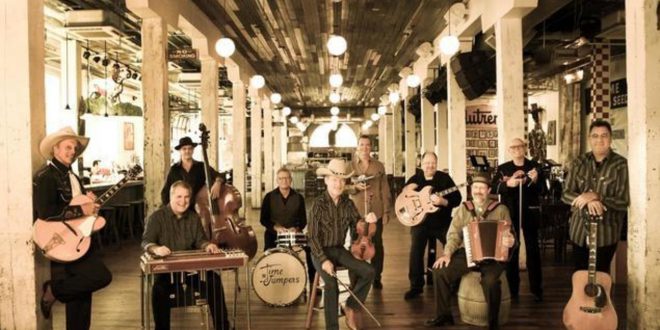 The Time Jumpers, a Nashville treasure, is celebrating its 20th anniversary this year.
As part of that celebration, the super-group will be adding a handful of dates to
their standing Monday night shows at 3rd & Lindsley

The Time Jumpers, a Nashville treasure, is celebrating its 20th anniversary this year. As part of that celebration, the super-group will be adding a handful of dates to their standing Monday night shows at 3rd & Lindsley. The first additional show, Friday, June 1, was announced three weeks ago. Now the band has announced two more dates, Friday, June 29 and Friday, July 27. All shows start at 8PM and tickets can be purchased online HERE or call toll free 844-425-0513

The Time Jumpers’ Monday night shows are historic and sell out quickly. For two decades the show has been the destination in Nashville on a Monday night—joining the tradition of other historic Monday night shows—the late Les Paul’s regular gig at the Iridium in New York, and Woody Allen’s weekly jazz performance at the now shuttered Michael’s Pub, also in New York.

Over the last 20 years, The Time Jumpers has had a slowly revolving door of remarkable musicians including Aubrey Haynie, Dennis Crouch, Hoot Hester, Dawn Sears, Carolyn Martin and John Hughey. One of the remaining original members, Jeff Taylor commented, “The longevity and acceptance of this band has been one of the nicest surprises of my career.”

The Time Jumpers was established in Nashville in May 1998 by an assemblage of high-dollar studio musicians who wanted to spend some spare time jamming with their sonically gifted buddies.  The notion of building a rabidly devoted following was the last thing on their minds.  But that’s what happened.

The band’s original home was at the historic Station Inn. As word spread along Music Row that something special was happening at their shows, big stars began dropping by, some to sit in with the band, others just to enjoy the vast array of country, swing, jazz and pop standards The Time Jumpers rejoiced in playing.  Among those drop-bys were Bonnie Raitt, Reba McEntire, Norah Jones, Robert Plant, The White Stripes, Kings Of Leon, Jimmy Buffet, Joe Walsh, Diana Krall, Elvis Costello, Chris Isaak and Kelly Clarkson.  McEntire once commented, “One of my favorite memories of music in Nashville is going to listen to The Time Jumpers play live. They are all incredible musicians and singers and they remind me of what I love so much about music. The times they have asked me to come on stage and sing with them has been a total blast.”

Eventually, the lines to get in grew so long that in 2012 the band relocated the Monday night shows to one of Nashville’s hottest clubs for music, 3rd & Lindsley. Club owner Ron Brice comments, “We’re very proud to be presenting The Time Jumpers and to be a part of their 20th anniversary show celebrations and residency.”

Their individual recording and performing credits cover virtually the entire history of country music, ranging from Slim Whitman to Carrie Underwood, and their members have recorded extensively with artists in other genres as well, from Barbra Streisand to Megadeth. The Time Jumpers have three albums, Jumpin’ Time, The Time Jumpers and their most recent Kid Sister, a tribute to the late Dawn Sears.

Get Your Concert & Event Tickets Here!

Music editor for Nashville.com. Jerry Holthouse is a content writer, songwriter and a graphic designer. He owns and runs Holthouse Creative, a full service creative agency. He is an avid outdoorsman and a lover of everything music. You can contact him at JerryHolthouse@Nashville.com
Previous DOWNTOWN NASHVILLE STREET CLOSURES SCHEDULED FOR CMA FEST MAY 31—JUNE 12
Next Brett Eldredge Announces Abby Anderson Will Join Him On Tour