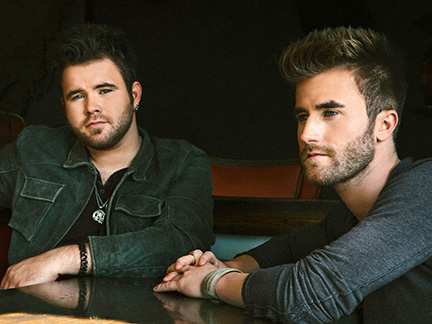 With support for their current single and video, “What Ever Happened,” unwavering, the Swon Brothers, Season Four, Team Blake, finalists of the hit NBC  series “The Voice,” are gearing up to release a new single for their enthusiastic fans. The brothers took to Facebook LIVE last night to announce the impending midnight release of the new single “Midnight Lovers” to their “Swontourage,” as their loyal fans are affectionately known.  Find it HERE.

Written by Zach Swon, Colton Swon, Stephen Hunley and Brandon Day, the steamy, coming of age single, recalls a Romeo and Juliet romance between two young lovers, forbidden from seeing each other, but finding that the shadows of the midnight hour provide the perfect cover for their secret rendezvous. Upbeat and contemporary production with an almost Springsteen-esque feel provides the musical bed for the duo’s newest release.

It’s been a busy year for Zach and Colton. In addition to tackling an exhaustive tour schedule, they have devoted much of their time to developing music for their next collection, Colton tied the knot with indie roots-rock singer/songwriter, and fellow “Voice” alumni, Caroline Glaser, in March. Zach and Colton’s dedicated fan base continues to grow and their unflappable enthusiasm for the big-hearted brothers has kept the video for “What Ever Happened” in the Top 10 of Taste of Country’s Video Countdown for more than 15 weeks.

Music editor for Nashville.com. Jerry Holthouse is a content writer, songwriter and a graphic designer. He owns and runs Holthouse Creative, a full service creative agency. He is an avid outdoorsman and a lover of everything music. You can contact him at JerryHolthouse@Nashville.com
Previous New Track From The Late, Great, Charles Bradley
Next All Vocal Group Home Free Cover ‘Finally Free’