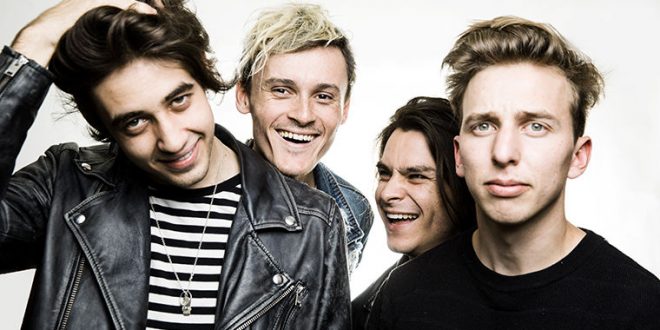 The Faim To Rock Rocketown Tomorrow 11/29

The Faim is in the midst of their first U.S. tour and the hottest thing to come up from down under in a long time. The Perth rockers are Josh Raven (lead vocals), Sam Tye (lead guitar), and Stephen Beerkens (bass and keyboard), who all met in high school and formed a band originally called Small Town Heroes.  However Faim, which is a French word meaning Hungry,  definitely suits them better as the band is building momentum and hungry for success in the U.S..

The band reached out to producer John Feldmann who has previously worked with Blink-182’s Mark Hoppus and Twenty One Pilots’ Josh Dun and the chemistry was instant. Feldmann set them up with some high profile co-writes (Pete Wentz, Chris Cheney and Ashton Irwin) and the band made themselves right at home in L.A. As far as the song writing process goes Raven says there’s no primary songwriter “The songs would be our songs if everybody didn’t have some input. And we never stop writing”

The Faim will also soundtrack the brand new Coca-Cola television advertising campaign in the U.K. with their cover of Blondie’s classic hit, “One Way or Another.”

The Faim has been compared to Fall Out Boy and Panic! At The Disco but if you’re going to label them, label them pure rock and roll. Just listen to “Saints Of The Sinners” their debut single (above) to confirm that.  It was co-written by Pete Wentz.

The guys will be playing Rocketown in Nashville on tomorrow, Thursday, 11/29 and you don’t want to miss it. They are not on the Rocketown website schedule (when this was published) but they will be there following Arlington.

Music editor for Nashville.com. Jerry Holthouse is a content writer, songwriter and a graphic designer. He owns and runs Holthouse Creative, a full service creative agency. He is an avid outdoorsman and a lover of everything music. You can contact him at JerryHolthouse@Nashville.com
Previous Lorraine Jordan & Carolina Road Hit Number One On B.U. Airplay
Next Moon Taxi Partners With Lightning 100 And Frothy Monkey To Help Nashville Families