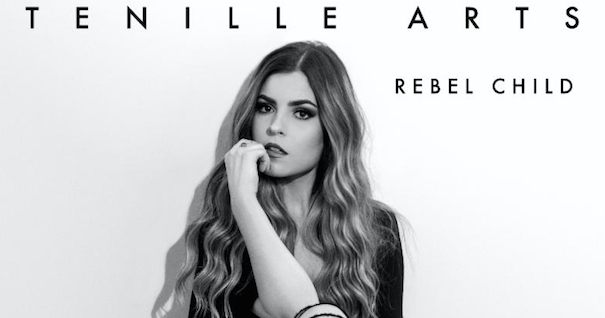 Tenille Arts made waves with her self-titled debut EP last year, resulting in streaming giant Pandora naming her one of their new artists to watch and other media outlets touting her insightful songwriting and powerful vocals. Tonight the torch singer/songwriter announced on a massive Facebook Live event that her debut full-length album Rebel Child is set for release October 20, 2017. Pre-orders on the 11-song collection begin today at amazon and iTunes here.
Tenille spent ­­­­­time chatting with fans all over the world, answering questions about the new music, the writers, stories behind the songs and performing four songs from Rebel Child live. The Facebook Live participants were also the first to hear the pre-order news.
“If someone would have told me that I would get to release my first album almost exactly a year after my debut EP, I wouldn’t have believed it,” said an elated Tenille. “It has been such an incredible journey so far, and I am so grateful for every single person who has been a part of it.”
Tenille co-wrote 10 of the 11 songs on Rebel Child with the likes of Chris Caminiti, Lydia Dall, Mark Narmore, Buddy Owens, Holly Stewart, Adam Wheeler and Doug Wilhite. Wheeler produced the album with Matt Rovey for 19th & Grand Records.
“Cold Feet,” Tenille’s first official single release in the U.S., is affectionately dubbed “a Nicholas Sparks novel in a song” for leaving the poignant ending up to the listener. Wheeler wrote the song with John Ritter, and the story and performance so moved noted music critic Tom Roland that he penned a full-page “Makin’ Tracks” feature about the recording in a recent issue of the Billboard Country Update – his first on an independent release. The corresponding music video took the haunting song to an entirely new level has already received over 645,000 views.
“This was the first song I’ve recorded that I didn’t write,” said Tenille. “I’ve always been open to outside songs, but nothing had ever blown me away. One of my producers said ‘I’ve got this song that I think you might like.’ I remember thinking as the song ended, ‘This is the most incredible song I have ever heard.’ Even though it’s in third person, I feel all of those emotions. It’s about a battle between your head and your heart and what’s more important in life. Is it being safe, and knowing that you are going to have a stable relationship, or is it taking that risk of losing it all of that for the person you really love. I really love this song.”
Rebel Child is currently available for pre-order here. The album will be available at all digital outlets and at amazon.com beginning October 20, 2017.
About Tenille Arts: The 23-year-old behind all of this recent attention is quietly confident country music lover Tenille Arts (her real name) who was raised in the small Canadian prairie town of Weyburn, Saskatchewan. She picked up the guitar and penned her first song at the age of 13 and has been performing across the US and Canada ever since. She made the move to Nashville over a year ago, and a songwriting session brought her to the attention of award-winning producer Matt Rovey (Craig Campbell, Dean Brody), songwriter/ producer Adam Wheeler and Noble Vision Music Group head Hal Oven.
Tenille co-wrote all six songs on her debut EP, which entered the Canadian iTunes Country Chart at #1 and hit #10 on the overall Canadian iTunes Chart and was featured on the front page in the coveted “New & Noteworthy” section.
Music Row Magazine critic Robert K. Oermann called Tenille “Promising in the extreme,” Pandora said, “with songwriting inspired by Don Henley and reminiscent of early Taylor Swift, and vocals the size of her native Canada, Arts’ future is bright,” and popular country website whiskeyriff.com labeled Tenille a “new country artist name you need to know immediately.”
Catch up with Tenille at:
www.TenilleArts.com
https://www.facebook.com/tenillearts
https://twitter.com/TenilleArts
https://www.instagram.com/tenillearts/
https://www.youtube.com/tenillearts
Rebel Child Track Listing:
1. Rebel Child – Tenille Arts/Adam Wheeler
2. Outta My Mind – Tenille Arts/Mark Narmore/Adam Wheeler
3. Run Out Of You – Tenille Arts/Adam Wheeler
4. There’s This Boy – Tenille Arts/Lydia Dall/Holly Stewart
5. Alabama – Tenille Arts/Adam Wheeler/Mark Narmore
6. Raindrops, Dirt Roads – Tenille Arts/Adam Wheeler/Mark Narmore
7. Good About It – Tenille Arts/Chris Caminiti/Adam Wheeler
8. Steal A Heart – Tenille Arts/Adam Wheeler/Doug Wilhite
9. Red Flag White – Tenille Arts/Mark Narmore
10. Good Guys – Tenille Arts/Buddy Owens/Adam Wheeler
11. Cold Feet – John Ritter/Adam Wheeler