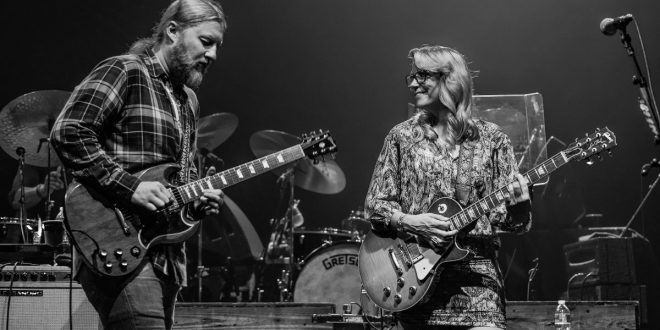 Tedeschi Trucks Band Back at the Ryman in Nashville Feb 2020 -> Tour Dates & TICKETS!

Tedeschi Trucks Band Back at the Ryman In Feb.

Following a very successful and creative year, Tedeschi Trucks Band looks ahead to 2020 with a limited touring schedule, including the Ryman for their annual multi-night residency on February 27, 28 and 29. BUY Tickets Here

Led by Derek Trucks’ masterful fretwork and Susan Tedeschi’s naturally stunning, emotive vocals and guitar talents, the 12-member strong collective continues to expand musical boundaries in ways that only a rare caliber of musician can achieve.

Now celebrating 10 years together, the ensemble’s commanding performances and exceptional musical chemistry are hallmarks of the can’t-miss-concert experience fans have come to anticipate live and are also evident throughout their new recordings. In February 2019, the band released its fourth studio album, Signs, and companion EP High and Mighty to widespread acclaim. The collection is notable for much of its songwriting informed by the loss of loved ones and mentors such as Gregg Allman, Butch Trucks, Leon Russell, Col. Bruce Hampton and takes on an even deeper meaning with the untimely passing of their own keyboardist Kofi Burbridge.

Yet, their music doesn’t dwell on darkness and despair, it beckons with the optimism and hope that has become a signature part of TTB’s message in the studio and on stage.

“This band is really good at reinventing themselves every night,” Derek insists. “That’s how you keep things fresh. You don’t want to abandon the sentiment of a song, but you do want to be able to expand on it in new and exciting ways.”

Along with the release of new music, 2019 was packed with touring highlights included their multi-band collaborative “Wheels of Soul” summer amphitheater tour – with 2019 special guests Blackberry Smoke and Shovels & Rope. They followed with a pair of historic performances in Bethel, NY on the 50th anniversary weekend of Woodstock, and at the Lockn’ Music Festival where as headliners they played Derek and the Dominos’ legendary album, Layla and Other Assorted Love Songs, with Trey Anastasio.

Though the group will be off the road in March, TTB’s own Mike Mattison will issue his second solo album, Afterglow via Landslide Records. Afterglow is an eclectic array of original material, solidly Americana, with touches of blues and rock ‘n roll, due for release March 20.

“This is a special group of musicians,” Susan says. “All of these people we play with are extremely talented, and each of them could easily be fronting their own outfit. Everybody is so gifted, and we all realize how special this band is. We’re going to keep working hard at it and move it forward.”

Music editor for Nashville.com. Jerry Holthouse is a content writer, songwriter and a graphic designer. He owns and runs Holthouse Creative, a full service creative agency. He is an avid outdoorsman and a lover of everything music. You can contact him at JerryHolthouse@Nashville.com
Previous Trace Adkins Announces The Way I Wanna Go Tour 2020
Next Kenny Chesney Receives CRS Humanitarian of the Year Honor