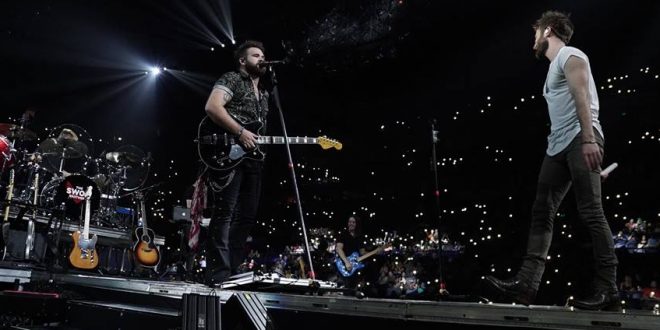 You’ve just released your new EP, PRETTY COOL SCARS could you tell me about this project and what is was like working with Brad Hill?

Zach- We released Pretty Cool Scars in March and Brad Hill was an amazing producer. He has been doing it a long time, but people are now starting to really recognize his work (Brothers Osborne, Maren Morris) and talent. It is probably the funnest record we have ever done. It brought out sides of us we did not know were there. We write some, but also record outside songs, and Brad really helped with the song selection process.

What about your single “Don’t Call Me” how was it chosen to be a single.

Zach- Brad actually brought us this song first and said “hey, I think you guys would sound great on this.” So we brought it home and fell in love with the melody first. Then we sat down on acoustic guitar just to see what we would sound like singing it, and it really worked for us. Brad has a great ear and it was just a blast to work with him. I can’t say enough about him.

Where does your lyrical content comes from, is it mainly personal experience?

Zach- On this project we only wrote one song called “About Last Night.” It’s really just the best songs wins for us. There are some great writers in Nashville that pitched us some songs, and we are very honored to have the songs we do on this project.

Colton- We co-wrote “About Last Night with Joey Hyde and Matt McGinn. Joey Hyde was actually a writer on our very first single “Later On.” But we actually had that song in our back pocket for almost two years. I think at the time it was written Zach was the one that could relate to the song. I think some songs you definitely get inspired by personal experiences, even if it is not about your life, you may have friends that are going through it. I have seen many times people on social media saying so “About last night…” And that was the idea we had going into this song. But it turned into a really cool, fun song. We love it and anytime we can help fellow writers out and get them a cut, we want to do that.

What has been the most exciting thing that has happened to the band, either in the past or present?

Colton— The most exciting thing, there are so many! But i’d say it has to be everytime we step on stage at the Opry. It is such an honor to walk and stand in that circle. Then every time we see people singing our songs back to us at shows. There is just no greater feeling. The Carrie Underwood tour was definitely a highlight of our career. But seeing people singing your songs in the setting of a huge arena, it feel so good. We are just so lucky to do what we do.

Who are your favorite artists that you listen to/support?

Zach-We have a long long list of musical inspirations. I think my all time favorites are the Eagles, Bob Seger, and James Taylor. I rarely play anything new in my truck if I am being completely honest. I love the old stuff like George Jones and Merle Haggard, I just can’t get enough of it. But that being said we do listen to everything from Journey to Michael Jackson to the Weeknd. We have a wide range and appreciate all music.

What are your hobbies/talents outside of music?

Zach-I don’t know, I’ve pretty much lived and breathed music since I was twelve. They say its not work if you love what you are doing. I recently did get into painting a bit and watched Bob Ross films on Netflix. I am also really good at tetris.

Colton- I love to be out on the field, I love to golf, and I am really addicted to just being outside and working out. I actually like to mow the lawn. It’s satisfying. My fiance Caroline and I love to go to sushi and the movies, we are also really involved at church.

Lightning Round: Ok, let’s talk about a few of your favorites.
Bigger foodie in the band? Colton
Favorite place to go on date night? Zach- any concert, Colton- Regal Cinema
Tootsies, Layla’s or Roberts? Tootsies
Burger? Zach- In and Out Burger, Colton- Burger Up
Breakfast? Zach- I don’t eat it, Colton- First Watch
BBQ? in Oklahoma
Juke Food: Zach- Lays potato chips, Colton- slim jims
What’s the best thing to eat that’s deep fried? pickles
What condiment do you always have in your fridge? Zach- Louisiana Hot Sauce, Colton- Mustard
Drink of choice? Zach- Diet Mt Dew, Colton- La Croix
Finally, If you could eat or have a drink with one person dead or alive, who would it be and what would you have?
Zach-Elvis- something really fried or Glenn Frey and coffee
Colton- Steve Carell and chicken salad

ABOUT SWON BROTHERS:
The Swon Brothers gained notoriety as finalists on NBC’s “The Voice,” in 2013 and released their major-label debut, THE SWON BROTHERS, on October 14, 2014, putting their stamp on the 11-song collection by co-producing with award-winning producer Mark Bright. The album’s first single “Later On” was the duo’s first Top 15 HIT.In 2014 Zach and Colton received a CMA Award nomination for “Vocal Duo of the Year.” They received an ACM Award nomination for “Vocal Duo of the Year” followed by a CMT Music Award nomination for “Duo Video of the Year” in 2015 and also opened for Brad Paisley on his Country Nation World Tour earlier that year. In January of 2016 the brothers surprised their fans with a brand new EP called TIMELESS, which hit the #2 spot on the Country iTunes chart just hours after its release, and debuted at #19 on Billboard’s Top Country Albums Chart. On January 30, 2016 they kicked off their first show in Jacksonville, Florida on Carrie Underwood’s “Storyteller Tour,” which touredarenas across the U.S. and Canada and wrapped on November 28th. Earlier that summer the brothers played a slate of their own “Swoncerts” nationwide. On March 17th of this year, Zach and Colton released their new EP, PRETTY COOL SCARS, which was produced by Brad Hill (Maren Morris, Brothers Osborne). The debut single “Don’t Call Me” was released on iTunes on February 24th and is also at country radio.