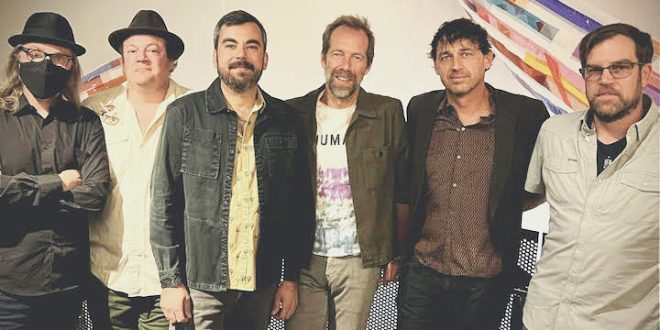 Today, the Grammy Award-winning Steep Canyon Rangers announced the addition of North Carolina singer-songwriter Aaron Burdett as the newest Ranger. Burdett started playing shows with the band in August and is now officially on board.

“Aaron showed up on our radar late in the audition process, and we were all struck by the honesty and power of his music,” said the band in a joint statement. “He arrives as an exceptional North Carolina artist in his own right, and our connection feels fresh and familiar at the same time. His talent as a singer and songwriter is already pushing the band to new heights.”

“I got the call out of the blue from SCR on a Monday morning a couple of months ago, and although I’d never imagined collaborating with them, the closer I looked at it, the better fit it seemed to be,” adds Aaron Burdett “And as we’ve tested the waters and played gigs and traveled and hung out together, that feeling has only grown and solidified. It’s a dream come true to have an opportunity to play with musicians of this caliber and at this level. We already sound really good together, and I can’t wait to see where we are a year from now.”

Over the band’s career, the three-time Grammy nominees have released 13 studio albums, three collaborative albums with actor/banjoist Steve Martin, been inducted into the North Carolina Music Hall of Fame, and appeared on some of music’s biggest stages. In 2013, Nobody Knows You won the Grammy Award for Best Bluegrass Album, while 2012’s Rare Bird Alert and 2020’s North Carolina Songbook garnered nominations in the same category.

SCR has no Nashville dates in the current future but if you want to take a little road trip they’ll be in Chattanooga on Oct. 15 at the Soldiers and Sailors Memorial Auditorium with Steve Martin & Martin Short.

Music editor for Nashville.com. Jerry Holthouse is a content writer, songwriter and a graphic designer. He owns and runs Holthouse Creative, a full service creative agency. He is an avid outdoorsman and a lover of everything music. You can contact him at JerryHolthouse@Nashville.com
Previous Pilgrimage Festival Spot-Lights Local Vendors
Next “New Year’s Eve Live: Nashville’s Big Bash” Returns