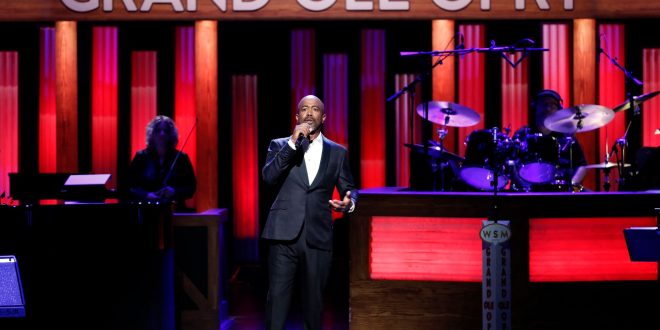 Stars Studded Tribute To Ray Charles At The Opry

Last night, the Grand Ole Opry, in association with the Ray Charles Foundation, celebrated the songs of Ray Charles and the influence this revolutionary artist had on country music, on a special Monday night Opry, “An Opry Salute to Ray Charles.”

The event was taped for a TV special that will premiere in February 2019 on public television stations nationwide.

During his formative years in Georgia and Florida, Ray Charles listened regularly to the Grand Ole Opry, beaming throughout the South via Nashville’s WSM-AM. Charles blended the blues and gospel into his original brand of R&B, played jazz, and recorded two volumes of the influential album Modern Sounds in Country & Western Music. The musical span of the artists featured on “An Opry Salute to Ray Charles” reflects the legendary artist’s ability to find the common ground in disparate styles of music and present them with a singular voice.

Host Darius Rucker addressed the packed audience at the beginning of the show stating, “As a Grand Ole Opry member I am moved to see the Opry recognize Ray and the magnitude of his contribution to country music. Both the Grand Ole Opry and Ray shared the same vision – to bridge musical genres.”

“Ray Charles had a deep love for country music. I know he would have been extremely proud and grateful for all of the artists who joined us this evening to pay tribute. Without the passion and support of executive producer Steve Buchanan and the entire Opry family for championing this special, we would not have been able to bring Ray’s legacy to the Opry stage,” said Valerie Ervin, President, Ray Charles Foundation.

Sally Williams, SVP & GM, Grand Ole Opry, stated, “The Opry was thrilled to salute Ray Charles and his passion for the music and storytelling of country music. The performers tonight demonstrated what Ray understood so well – that music has no bounds.”

The diverse list of artists who performed in tribute to Ray Charles with memorable covers and collaborations that will be seen on the television special include:

Boyz II Men and Chris Young opened the show with a special collaboration of “Your Love So Doggone Good” from the 1970 Ray Charles album Love Country Style
Travis Tritt revisited “I Am Moving On” which he originally performed with Ray Charles
Brett Eldredge moved the crowd with “That Lucky Old Sun”
LeAnn Rimes dazzled with her performance of “Fever”
Charlie Wilson rocked the house with “Unchain My Heart”
In between hosting duties, Darius Rucker performed “Don’t Change On Me”
Boyz II Men performed a stirring rendition of Ray Charles’ legendary hit “Georgia On My Mind” receiving a standing ovation from the packed crowd
Ronnie Milsap and Jessie Key joined forces on “You Are my Sunshine”
Leela James and Cam performed an energetic “Don’t Tell Me Your Troubles”
Lukas Nelson honored his dad, Willie Nelson, and Ray Charles with his version of their duet “Seven Spanish Angels”
Chris Young captivated the audience with Ray’s mega-hit “I Can’t Stop Loving You”
Allen Stone and Cam created a unique version of “Here We Go Again”
Charlie Wilson and LeAnn Rimes delivered a stunning collaboration of “Crying Time”
A powerful all-star collaboration of “America The Beautiful” performed by all of the artists closed out the show with an uplifting message of unity

Music editor for Nashville.com. Jerry Holthouse is a content writer, songwriter and a graphic designer. He owns and runs Holthouse Creative, a full service creative agency. He is an avid outdoorsman and a lover of everything music. You can contact him at JerryHolthouse@Nashville.com
Previous Lauren Morrow Plays The Basement East This Friday
Next Tootsie’s 58th Birthday Celebration Tomorrow Night