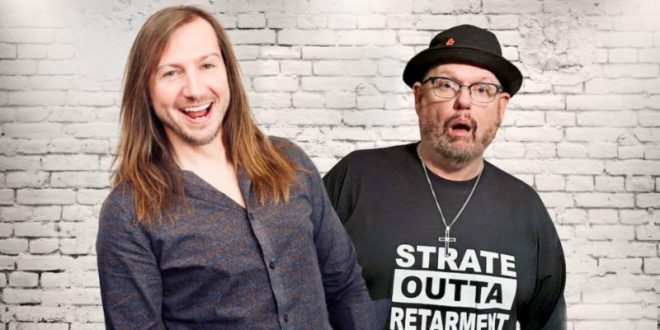 Southern Momma / Cledus T. Judd Comedy Experience will make a stop in Music City as part of the Nashville Comedy Festival at 8 p.m. on Friday, April 12, 2019 at War Memorial Auditorium. In addition to Darren Knight aka Southern Momma and Judd, the Nashville show will feature comedians Red Squirrel and Gary Cargal.

A native of Munford, Alabama, Knight is the fastest rising comedian in American history. He has quickly cultivated a massive online presence, accumulating over a half a billion views across multiple social media platforms. Darren takes his persona to the stage, selling out theatres and casinos nationwide. He’s been compared to Jeff Foxworthy, as the next star of redneck comedy.

Cledus T. Judd’s career has included nine studio albums, two EPs and no less than 25 music videos. No one was immune to his wit, sarcasm and often self-depricating humor. Following an extended hiatus, Cledus blasted “strate outta retarment” with the gut-busting “My Weight’s Goin’ Up Down” spoof of Bebe Rexha’s chart-topping “Meant To Be” featuring Florida Georgia Line and the hilarious “Gotta Pee” video.

Red Squirrel has been entertaining audiences around the Southeast with her country twang and her out of control and animated stage presence. Her twist on personal subjects involving the relationships between men and women keeps audiences laughing night after night.

The life of any party and a guaranteed good time, Gary Cargal is the breath of fresh air and a good stiff drink to the comedy world. Born, raised and educated in Alabama, Gary’s wealth of life experience – car salesman, Truck Driver, Hollywood film production assistant and sports referee – gives him a great base to draw funny from and he’s the juice to any club, bar or nightclub.

Top comedy production and management company Bang Productions, helmed by CEO John Edmonds Kozma who created Southern Momma/Cledus T Judd Comedy Experience, is internationally known for utilizing social media and extensive touring to break comedians such as Knight, Gary Cargal, Andrew Conn, Catfish Cooley, Ginger Billy and Red Squirrel. The company and its roster of comedians have amassed a network of 7.4 million comedy fans, which is growing at a rate of 150,000 per month. After signing with Bang last fall, the company skyrocketed Judd’s “Gotta Pee” video to over 6.3 million views and moved his Facebook followers to over 120,000.

Music editor for Nashville.com. Jerry Holthouse is a content writer, songwriter and a graphic designer. He owns and runs Holthouse Creative, a full service creative agency. He is an avid outdoorsman and a lover of everything music. You can contact him at JerryHolthouse@Nashville.com
Previous The Raconteurs To Drop First New Album In A Decade June 21
Next Luke Bryan Will Perform His New Single “Knockin’ Boots” On ACM’s April 7th