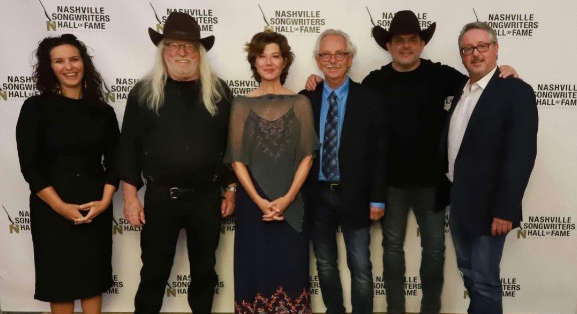 The Nashville Songwriters Hall of Fame (NaSHOF) has announced its Class of 2021: Amy Grant, Toby Keith, Rhett Akins, Buddy Cannon and John Scott Sherrill. The five will be inducted into the Hall this November, according to an announcement made today by Sarah Cates, chair of the organization’s board of directors, and Mark Ford, its executive director.

The five new inductees-elect will join the 213 previously inducted members of the elite organization when they are officially inducted during the “50/51” Nashville Songwriters Hall of Fame Gala on Monday, November 1, at the Music City Center. Because the organization’s 50th Anniversary celebration was postponed last year, this year’s event will honor two classes in a special double-sized event that will also spotlight NaSHOF’s previously named Class of 2020: Steve Earle, Bobbie Gentry, Kent Blazy, Brett James and Spooner Oldham.

“Today is one of my favorite days of the year, as we begin our journey to the Nashville Songwriters Hall of Fame Gala in November with the announcement of our upcoming class,” says Cates. “Nashville has always been the home of legendary songs written by the world’s finest songwriters – and this class is no exception. It’s our great honor today to welcome our class of 2021: Rhett Akins and Buddy Cannon in the songwriter category; John Scott Sherrill in the veteran songwriter category; Toby Keith as our songwriter/artist and Amy Grant as our veteran songwriter/artist.”

Rhett Akins’ songwriter credits include his own “That Ain’t My Truck,” as well as “Honey Bee” (Blake Shelton) and “It Goes Like This” (Thomas Rhett). Buddy Cannon’s resume is known for “Set ’Em Up Joe” (Vern Gosdin), “I’ve Come To Expect It From You” (George Strait) and “Give It Away” (George Strait). John Scott Sherrill’s hits include “Wild And Blue” (John Anderson), “The Church On Cumberland Road” (Shenandoah) and “How Long Gone” (Brooks & Dunn). Amy Grant popularized many of her own compositions, including “Baby Baby,” “That’s What Love Is For” and “Tennessee Christmas.” Toby Keith recorded many of his self-penned hits, including “Should’ve Been A Cowboy” “How Do You Like Me Now?!” and “As Good As I Once Was.”

Music editor for Nashville.com. Jerry Holthouse is a content writer, songwriter and a graphic designer. He owns and runs Holthouse Creative, a full service creative agency. He is an avid outdoorsman and a lover of everything music. You can contact him at JerryHolthouse@Nashville.com
Previous CMA Summer Jam Coming To Ascend July 27 & 28
Next Jimmie Allen Debuts Book “My Voice Is A Trumpet”