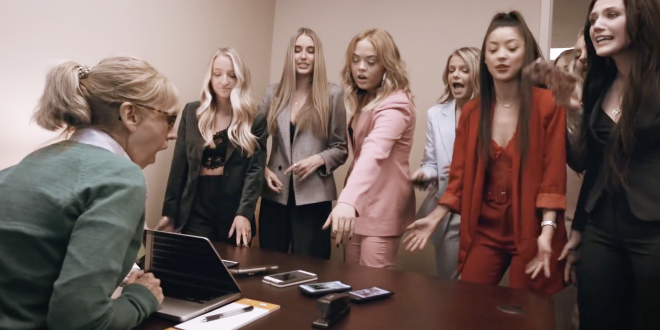 The female empowerment themes of “The Man” aligned perfectly with the Song Suffragettes mantra of #LetTheGirlsPlay. Says Helena Capps, Song Suffragettes’ VP, “With our past cover of Keith Urban’s ‘Female’ and our original song ‘Time’s Up’ , we took a more serious approach to female empowerment, but when we heard ‘The Man’, we decided it was time to do something fun. As usual, our Song Suffragettes alumnae didn’t hesitate to be a part of this project, which speaks again to the solidarity of our female singer-songwriters as they continue to strive to make their voices heard within the music community.”

Song Suffragettes is a collective of female singer-songwriters that performs every Monday night at The Listening Room Café in Nashville, TN. In just five years, Song Suffragettes has showcased over 240 talented women out of more than 1,400 who have submitted to play the show. With weekly sell-outs and a mantra of #LetTheGirlsPlay, Song Suffragettes vocally combats wide-spread discrimination against women in the music industry by giving female talent a place to play, grow and evolve with fellow creatives. Since its inception, 16 Song Suffragettes women have gone on to receive record deals and more than 40 have landed music publishing deals.

Music editor for Nashville.com. Jerry Holthouse is a content writer, songwriter and a graphic designer. He owns and runs Holthouse Creative, a full service creative agency. He is an avid outdoorsman and a lover of everything music. You can contact him at JerryHolthouse@Nashville.com
Previous Charlie Daniels Announces 2020 Volunteer Jam
Next Scotty McCreery Debuts Acoustic Version Of “This is It”